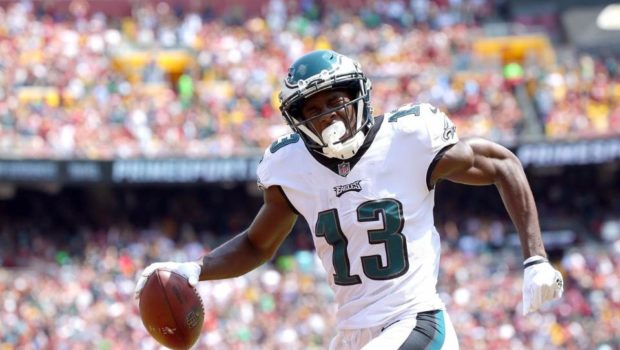 EAGLES SURE ARE MISSING THESE WOUNDED WARRIORS!

The Eagles have been playing this preseason without many of their starters and key reserves because of injuries.

Here’s a summary of where they stand:

Carson Wentz: Wentz has been cleared and participated in 11-on-11 last week. Doug Pederson wouldn’t commit to anything past a day by day approach.

Nelson Agholor (above): Agholor has missed almost two weeks of consecutive practices (including both preseason games), with a lower-body injury. The Eagles are preparing Agholor for Week 1, but he’s day-to-day.

Alshon Jeffery: there’s a chance he may not be ready for the season opener. Jeffery could start the season on the Physically Unable To Perform list. Alshon has been seen working out in a helmet, and Jeffery still plans to be back on the field by the Eagles season opener against Atlanta on September 6.

Jay Ajayi: the running back is dealing with a lower-body injury and didn’t play in Thursday’s preseason game against Cleveland.

Richard Rodgers: Rodgers won’t play the rest of the preseason, as Rodgers has been dubbed “week-to-week” by Doug Pederson. The Eagles could go with an extra tight end (Brent Celek maybe) for Week 1 because of Rodgers’ injury.

Josh Perkins: Perkins might be a candidate for the fourth tight end spot, but he has been out with a head injury.

Kamar Aiken: Aiken suffered a hamstring injury during last Thursday’s preseason loss to the Patriots and he has been out since. He’s also day-to-day.

Bryce Treggs: According to Tom Pelissero of NFL Network, Treggs will miss a few weeks with a hamstring strain, which may leave him out for the remainder of the preseason.