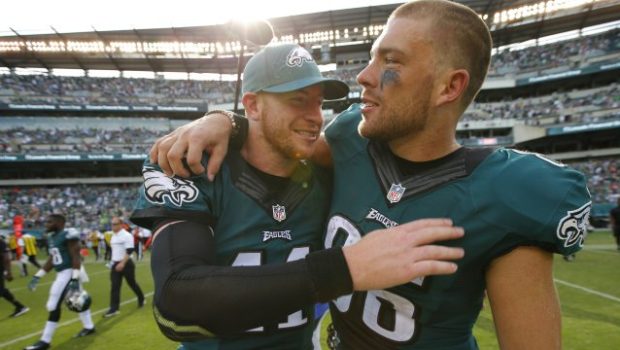 The glow from the Eagles’ impressive opening day victory on Sunday is still being felt on Tuesday — and it will last all week.

Not knowing what exactly was going through the 23-year-old’s head, it could have been straight jaw-wagging to get him through the days before the game started.

But it wasn’t! Wentz backed up every word, taking the ball down the field on his initial NFL drive of 75 yards on 9 plays, culminating in a 19 yard strike to Jordan Matthews in the left corner of the end zone to put the Eagles up 7-0 over the Cleveland Browns that would turn out to be a 29-10 opening day win.

The Eagles’ defense was tough the whole day, sacking RG3 3 times for 22 yard, with Cox, Barwin, and Graham getting to Robert Griffin III.

Head coach Doug Pederson acquitted himself well in his first game on the sidelines, calling a balanced game, winning the time of possession 39:20 to 20:40, not calling any bad timeouts to calm Eagles fans he hadn’t inherited Any Reid’s terrible clock management issues.

Time of possession battle was a big reason last season that Chip Kelly’s offense went 3 and out numerous times during the season, leaving the defense on the field many games with their tongues hanging out in the 4th quarter of eventual losses.

There were also no two-yard passes on the goal line either, another Andy Reid special — a good home opener all the way around.

The Eagles take their 1-0 record to Chicago next Monday Night to take on the Bears at Soldier Field, 8:30pm/ESPN.