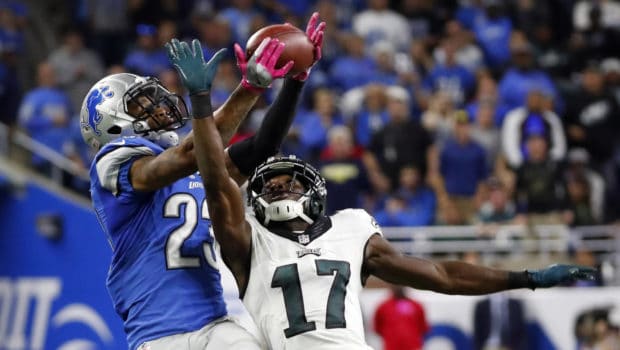 Matt Prater kicked a 29-yard field goal with 1:28 left and Darius Slay made an over-the-shoulder interception on the next snap (above), helping the Detroit Lions hand Carson Wentz his first loss with a 24-23 victory over the Eagles.

The Eagles (3-1) turned the ball over for the first time this season with 2:34 remaining when Ryan Matthews fumbled on a hit by Slay. The loose football was recovered by Tyrunn Walker at the Birds’ 45.

Matthew Stafford set up the game-winning kick by converting a third-and-4 from the Eagles 39 with a perfectly placed pass on a crossing route to Golden Tate, who drew an unnecessary roughness penalty on Malcom Jenkins.

The Eagles had the ball at their 25 with 1:28 remaining and no timeouts left. Wentz, who did not turn the ball over in his first three games, heaved a pass to Nelson Agholor on first down and Slay made the game-sealing interception at the Detroit 23.

The Lions scored on all three of their drives in the first half, building a 21-7 lead late in the second quarter.

Eagles defensive coordinator Jim Schwartz, who led the Lions from 2009 to 2013, seemed to make some adjustments.

The Lions gained just 19 yards on the first four possessions, fumbling once and punting three times.

The Eagles opened the second half with Wentz capping a nine-play, 75-yard drive with a 1-yard TD pass to Josh Huff.

Stafford’s unforced fumble on the ensuing drive was recovered by Nigel Bradham, who was arrested last Sunday on a misdemeanor concealed weapons charge, at the Lions 16.

The Lions held the Eagles to a field goal, allowing them to cling to a 21-20 lead.

Caleb Sturgis’ 49-yard field goal, his third, put the Eagles ahead for the first time with 6:45 left, but they couldn’t hold on.