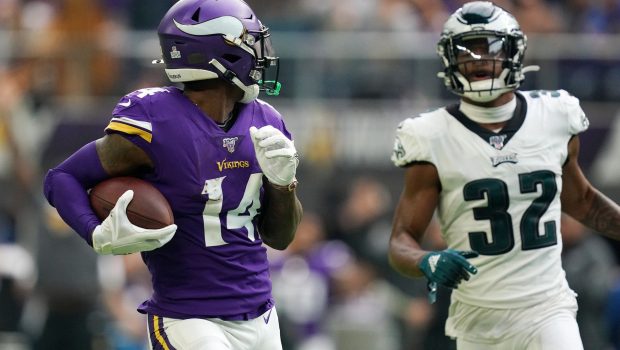 Memories of February 4, 2018 will last forever.

That was the night the Eagles won their only Super Bowl in U. S. Bank Stadium in Minneapolis.

But this Eagles team is far inferior to the squad that beat the Pats 41-33 that glorious Sunday night.

Especially in the secondary, which sucked so badly the Vikes receivers hardly broke a sweat.

A year-and-a half after that victory over the Patriots — which came after they ousted the Vikings in the NFC title game — the Eagles could only watch as the Vikings put up their best offensive effort of the season.

The Birds threw a scare into the U.S. Bank Stadium crowd by scoring 17 consecutive points after falling behind early, but the Vikings righted the ship in the second half to improve to 4-2.

Trailing 24-10 to start the third quarter, the Eagles (3-3) got a quick touchdown on a 3-yard pass from Carson Wentz to Alshon Jeffery and a 40-yard field goal from Blake Elliott to get within 24-20.

But the Vikings drove 75 yards and Cousins rifled an 11-yard touchdown pass to Diggs at the back of the end zone for a 31-20 edge with 1:16 left in the third.

Dalvin Cook’s 1-yard touchdown run midway through the fourth quarter made the score 38-20.

The Vikings raced to a 24-3 lead in the first half. On their opening possession, Cousins hit Adam Thielen for a 6-yard touchdown after Thielen beat cornerback Sidney Jones with a double move on the right side of the end zone.

After Dan Bailey’s 39-yard field goal gave the Vikings a 10-0 lead, Jake Elliott hit a 53-yarder for the Eagles.

Then Cousins and Diggs struck for long touchdown passes early in the second quarter. The first was a 62-yarder down the middle and the second was a 51-yarder down the left side. Diggs beat Rasul Douglas in one-on-one coverage for both scores and the 24-3 lead seemed comfortable.

The Eagles scored a touchdown late in the second quarter when Wentz hit tailback Miles Sanders on a 32-yard wheel route after Sanders got past Vikings linebacker Eric Kendricks.

Both teams had chances to score before halftime. Cousins overthrew a wide-open Diggs on a long post pattern, then was intercepted by former teammate Andrew Sendejo on a fluke play. Cousins’ sideline pass to Diggs popped up in the air as Diggs tried to stay in bounds, and dropped into Sendejo’s hands.

The Eagles drove to get within field goal range before the half, and set up for a 39-yarder, but tried a fake and Elliott’s pass was intercepted by defensive end Everson Griffen.

Wentz, a former North Dakota State standout, was 26-for-40 for 306 yards and was intercepted by Mackensie Alexander late in the game.