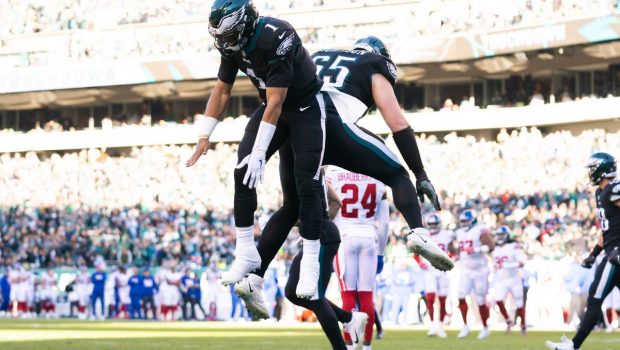 EAGLES SUCKED IN 1ST HALF, THEN EXPLODED LIKE A WILD CARD!

The Eagles’ offense broke it open in the third quarter with 17 points in 7:55:

A 4-yard touchdown run from Boston Scott, a 37-yard field goal from Jake Elliott, and a 4-yard TD catch from DeVonta Smith that survived a lengthy review.

And that allowed the Eagles to blow out the Giants, 34-10, after adding fourth-quarter scores from Lane Johnson, the Eagles’ right tackle, and a 29-yard interception return for a touchdown by Alex Singleton, the second of his career.

The Eagles improved to 8-7 and tied with the Niners for the second of three wild card spots in the NFC, a game ahead of the Vikes, who lost to the Rams.

New York’s lone touchdown came with just 3:59 to go in the game.

The win was a season-high third in a row for the Eagles, who are hitting their stride at the right time and sit at 8-7 with a trip to Washington on deck next Sunday.

If the season ended today, the Eagles would be in the playoffs as the seventh and final team because Minnesota lost to the Los Angeles Rams on Sunday. it doesn’t matter if the Saints win Monday night because the Eagles own the tiebreaker on them after beating them earlier this season

It was the seventh time this season the Eagles have scored 30-plus points after not doing it once in 2020. they are 6-1 in those games.

Smith, who had five catches for 80 yards, now has five TD catches this season. That is a team-high in receiving scores, one more than tight end Dallas Goedert. The rookie WR had a career-long 46-yard catch in the first half.

Scott, who saw more playing time after Miles Sanders was ruled out at halftime with a hand injury, scored his seventh career rushing touchdown against the Giants in what was his sixth career game. He has eight overall against the Eagles’ NFC East rival.