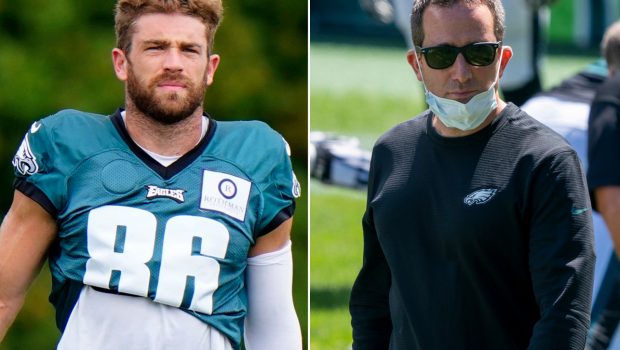 EAGLES SUCK: CAN HOWIE ROSEMAN SAVE HIS JOB AT TRADE DEADLINE!

Tight end Zach Ertz wants an extension, but he’s having a terrible year and has no leverage with Howie Roseman.

If the 1-3-1 Eagles were playing in any other division besides the NFC East, they would be looking toward 2021 already.

But they are only a half-game behind the first-place Cowboys and theoretically still have a shot at the playoffs.

Which means that big boss Howie Roseman still has a shot to keep his job.

That is, if he makes a couple of moves before the Nov. 3 trade deadline.

“He’s looking for action. If there is a trade to be made he’ll do it. Bringing in a free agent from the outside is tougher now and more risky with COVID, and he loves to make trades anyway. I’ll bet you anything he gets something done before the deadline.”

Quarterback Carson Wentz is having the worst season of his career at least in part due to the roster shuffle, though the team is very hopeful that many of those vital injured veterans will be back in the second half of the season.

Linebacker, an area of consideration in the early rounds of the draft, is one area of focus for the team, according to some who have been in contact with Roseman.