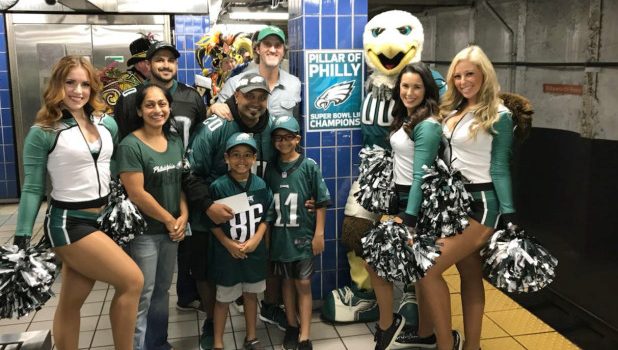 EAGLES SUBWAY POLE-SMACKING FAN GETS HIS 15 MINUTES OF FAME!

Jigar Desai is now the subject of an NFL digital short feature, shot ahead of the Eagles game against the Jaguars in London on Oct. 28. In the short, he’s surprised with tickets for himself, his wife and two kids to attend the game in England.

Back in January, Desai, sporting a Brian Dawkins jersey, was trying to rally subway passengers for the NFC Championship game against the Vikings. He was filmed running alongside the train on the platform, and then all of a sudden slamming into a pole and bumping off the train.

Passenger video of his fan fail took off on social media, prompting everything from Philly sports pride to general mockery.

“At the end of it all, if you are going to have a knucklehead moment caught on camera from two angles, then it better have results,” said Desai, who works as a consultant with a life sciences and health care company.

With the Eagles going on to win their first Super Bowl and Dawkins being inducted into the Pro Football Hall of Fame, “I couldn’t have scripted a better ending,” he said: