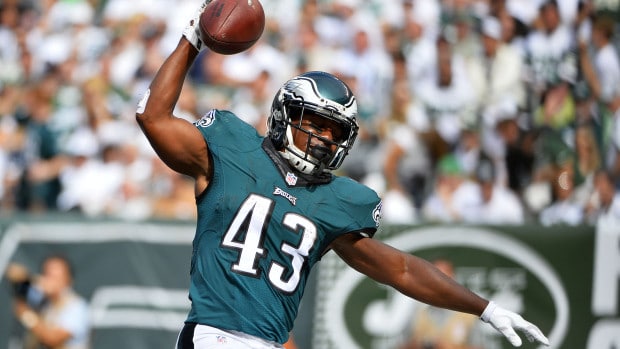 EAGLES’ STUD DARREN SPROLES DESERVES EVERY BUCK HE GETS!

The Eagles surprised a lot of NFL observers yesterday by digging deep and extending combo special teams/running back Darren Sproles.

Sproles somehow remains as dangerous as ever at age 33, and the Eagles rewarded him with a one-year contract extension that will keep the running back in Philly through 2017.

Some questioned the Chargers’ fourth-round draft selection in 2005. Yes, Sproles had just left Kansas State as the school’s all-time leading rusher. But with a backfield that already included LaDainian Tomlinson and Michael Turner, running back was the last of San Diego’s concerns. How could a 5-6, 180-pound addition contribute?

Forget the eight carries Sproles received during his rookie season. His 1,696 all-purpose yards that year, including 18 punt returns and 63 kick returns, was a sign of things to come. “Lightning Bug” was born.

Sproles is not and never has been the feature back on his team. First with the Chargers, then with the Saints and now with the Eagles, he has “started” only 23 of the 153 regular-season NFL games in which he has played. The limited workload likely explains why Sproles remains so speedy and shifty for an age at which most players lose such attributes.

Or maybe he’s just that special. Saints quarterback Drew Brees, who was in San Diego for Sproles’ rookie season and reportedly played a major role in the RB’s recruitment to New Orleans years later, believes that’s the case.

“I think a Darren Sproles only comes around once in your lifetime, in my career and in everybody’s career,” Brees said in 2014, via NFL.com , after his team traded Sproles to Philly for a measly fifth-round draft pick. “There may be another one 15, 20 years from now. But there’s not many guys like Darren Sproles. He’s a special player, he’s a special person, he’s a special teammate.”

It’s fitting that Sproles caught the pass (a touchdown) that Brees threw to break the single-season passing yards record in 2011. Through some of his more productive seasons, including the year (’11) he broke the single-season all-purpose yards record, Sproles made Brees’ life easier and the Saints’ offense virtually impossible to stop with his versatility out of the backfield. Whether it was a quick screen or a routine draw, the threat of the little guy making a huge play could never be discounted.

It still can’t be discounted.

When the Eagles acquired Sproles before the 2014 season, they allowed him to focus on punt returns and leave the kick return duties to others. For some reason, that’s what it took for Sproles to make his only two Pro Bowls in each of the last two seasons. But the move has paid off for both the player and the team.

Sproles already has four punt return touchdowns in Philadelphia, tied with DeSean Jackson for the most in Eagles history. He had three in seven seasons with the Chargers and Saints. His average of 12.4 yards per punt return over the last two seasons is by far the best of his career.

The quickness, the speed, the agility — it’s all still there, and it’s key to the Eagles’ success. The Jets know from experience. … So do the Patriots .

And to Brees, the numbers barely begin to tell the story of Sproles and his NFL success.

“He’s the epitome of what you would want in a teammate,” Brees said of Sproles last year, via NJ.com . “He’s a stud. Sproles is one of my favorite people. He’s one of my favorite teammates I’ve ever had. We’ve trained together every offseason for awhile now in San Diego. I’d say we push each other, but it’s really me trying to keep up with him all the time. His work ethic is second to none, his focus, his intensity …”

Now, as he enters his 12th NFL season with a little more job security, Sproles is a symbol. He’s a role model for all undersized players, not just running backs. Now, when teams like the Colts bring in players with similar attributes, they’re not looking for a change-of-pace back or an explosive return man.

They’re looking for the next Darren Sproles.