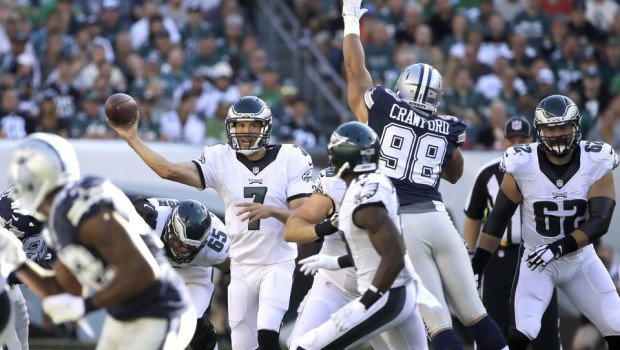 EAGLES STINK AT THE LINC: WAXED IN HOME OPENER 20-10 BY DALLAS

The say the Eagles stunk in today’s 20-10 loss to the Cowboys at the Linc doesn’t do justice to the concept of stinking.

Even though Tony Romo is going to be out for a good long time after breaking his left collarbone for the second time in his career and the Cowboys didn’t score an offensive touchdown until the fourth quarter, the Eagles still may have had it worse on Sunday.

Chip Kelly’s ran the ball 17 times for a total of seven yards with DeMarco Murray’s first game against his former teammates doing little to make Dallas look bad for letting him walk. Murray ran 13 times for two yards and even his five catches for 53 yards didn’t amount to much as Sam Bradford (above) threw a pair of interceptions and fumbled a snap that took him by surprise to kill rare bursts of positive movement for the Eagles.

Give credit to the Cowboys defense for being ready for everything the Eagles threw their way, but tipping the cap to the opponent probably won’t help Kelly explain why the unit was steamrolled on Sunday afternoon. The anemic final totals — 226 yards and 17 first downs — would look even worse if not for 18 penalties by the Cowboys that helped the Eagles hold onto the ball at various points during the game. Given that many of the yards and that the Eagles’ only touchdown came once the game was decided, even that help didn’t stop it from adding up to a pathetic effort.

Those penalties, Romo’s injury and the Eagles’ inability to approach competency on offense helped make for an ugly game, although there were a few amusing moments. One came when Cowboys kicker Dan Bailey was flagged for unsportsmanlike conduct on the sideline at the end of a Murray catch for some kind of run-in with Murray that seemed too innocuous for a flag even if it didn’t involve a kicker.

The win moves the Cowboys to 2-0, but there isn’t likely to be a lot of celebrating on the flight back to Dallas. Romo’s injury leaves the team without their franchise quarterback and top wide receiver for a long stretch that will put pressure on the defense — which doesn’t have either Greg Hardy or Randy Gregory at present — to play up to this level on a weekly basis.

Pressure will be on in Philly too with Kelly under the crosshairs after an 0-2 start for the team he built to his specifications.