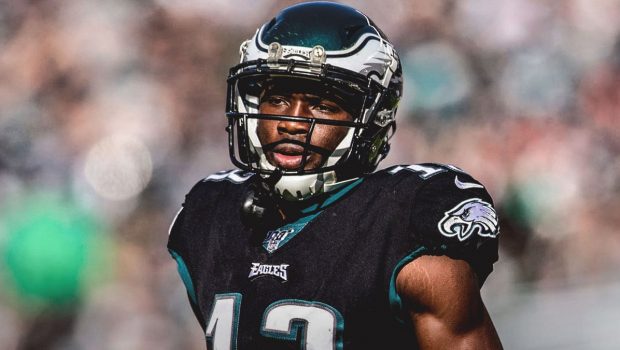 WHY DO EAGLES STILL HAVE FAITH IN WOEFUL WR NELSON AGHOLOR?

How long will the Eagles wait for former No. 1 draft pick Nelson Agholor to catch passes in a manner befitting a top pick?

With both DeSean Jackson and Alshon Jeffery sidelined last Sunday against the Pats, Agholor had just four catches for 40 yards, and failed to catch a potential tying TD pass at the back of the end zone at the end of the game.

He has not scored a touchdown since Week 3, and on the season overall, he has totaled 36 grabs for 322 yards and three scores.

“I would say that’s probably not fair,” said Eagles offensive coordinator Mike Groh said yesterday when asked if Agholor has taken a step back in 2019. “I would say that over the last two years he’s had to wear a lot of different hats in our offense due to the attrition at the position. One of his strengths is his mental flexibility and his ability to learn. He knows the entire system as well as anybody, so he’s able to handle a lot from that standpoint, but the flip side of that coin is then he gets moved around.”

Last year, Agholor caught 64 passes for 736 yards and four touchdowns, and in 2017, he hauled in 62 receptions for 768 yards while reaching the end zone eight times.