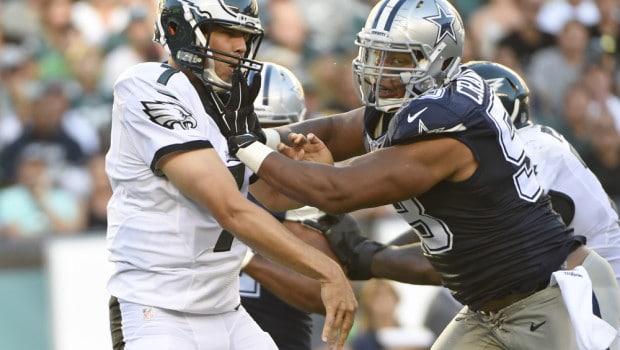 EAGLES STILL ALIVE IN NFC EAST, WHICH IS RESEMBLING THE BIG EAST!

As hard as it may be to believe, the 0-2 Eagles aren’t dead yet in the NFC East, which is starting to look like the Big East in terms of ability to compete in the NFL.

After one of the most inept performances by an Eagles offense in more than 50 years — if you think Sam Bradford looked bad yesterday you should have seen poor Sonny Jurgensen trying to fling it behind the decimated O-line in 1962 and 1963! — you realize that the rest of the division is also awful.

A Dallas Cowboys’ offense that already was without injured wide receiver Dez Bryant and said an offseason farewell to tailback DeMarco Murray lost an even more indispensable player: Quarterback Tony Romo suffered a fracture of his left clavicle in the third quarter of a victory over the Philadelphia Eagles.

It hardly mattered that the Cowboys upped their record to 2-0 by continuing to control the game after Romo’s exit to beat the Eagles, 20-10. It seemed insignificant in comparison that the rest of the division is chasing the Cowboys, and that the winless Eagles and New York Giants already are two games back.

The Cowboys lost the one player they could not afford to lose and for the time being turned their hopes of repeating as division champions over to Romo’s backup, Brandon Weeden.

“It never feels good whenever you get hurt, I think, especially with the way I feel about our football team and the way that the guys played tonight,” Romo said. “But I’ll be ready to go when I come back.”

Romo, 35, said he expects to play again this season. But he and the Cowboys said they will not know a more definitive timetable for his return until after Romo undergoes further testing Monday.

“I hate it for him, man,” Weeden said. “I really do. He’s a close friend. He works his tail off. He deserves to be around a football team like this because he’s been doing it a long time and this is one of the better teams he’s been around.”

Romo fell on his left shoulder after being sacked and losing a fumble. He left the field and was taken to the locker room for X-ray exams.

“Beating the Eagles, it’s a big deal,” Cowboys executive Stephen Jones said in the locker room after the game. “We’ve got a team that everybody has a lot of confidence in around here. The team has a lot of confidence in themselves. But any time you lose your starting quarterback for an extended period of time, then you’re understanding what’s going on. At the same time, you’ve got to give this group a lot of credit for the way they played tonight.”

The Cowboys added to the Eagles’ early-season miseries by limiting the Birds to seven rushing yards. Murray, who signed with the Eagles as a free agent in the offseason, ran for two yards on 13 carries in his first game against his former team. That works out to an average of 0.2 yards per carry.

Dallas scored on a blocked punt and kept the Eagles without a touchdown until the game’s final two minutes. Weeden, a former starter for Cleveland, completed all seven of his passes in relief of Romo. He had a 42-yard touchdown pass to wide receiver Terrance Williams in the fourth quarter.

“Brandon came in and did a really nice job,” Cowboys Coach Jason Garrett said. “He’s a professional. He’s ready for that opportunity. He came in. He had poise. He had composure. He ran the offense. He made the plays when we needed to make them. I thought everybody else on offense rallied around him, too. I thought we controlled the line of scrimmage [and] ran the ball a little bit better. The guys outside made some plays for him.”

But few in the Cowboys’ locker room were even trying to pretend that the Cowboys are the same team without Romo. He was one of the league’s most valuable players last season, when he threw for 3,705 yards and 34 touchdowns with nine interceptions. He crafted a late game-winning drive in the season opener, aided by the Giants’ clock mismanagement, even after the Cowboys lost Bryant to a broken bone in his foot.

“Stuff happens,” Romo said. “It’s the NFL. Things are gonna come up. It’s our job to just go back to work and the guys on this football team know… it’s really just gonna be about this next week. After tonight, guys are gonna enjoy it and then they’re gonna get back to work…. We have a football team that understands when things don’t go your way, you’ve just got to go back to work and keep getting better. Our team has a great chance and opportunity to go and continue to win.”