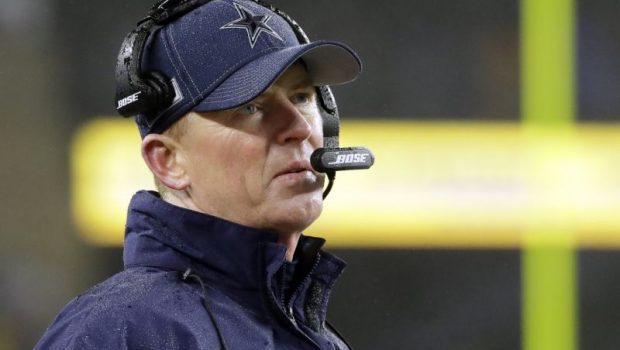 EAGLES STILL A GAME OUT, AND COWBOYS GARRETT IS A BUBBLE BOY!

As bad as the Eagles played yesterday in a 17-9 loss to the Seahawks at the Linc, the dreaded Dallas Cowboys looked worse in losing 13-9 at New England.

They fell to 6-5, which is good enough for the NFC East lead over the Birds who are 5-6.

And all of a sudden Cowboys coach Jason Garrett is looking like he’s about to get fired.

There was a report that Garrett allegedly has some fondness for the New York Giants job.

And Dallas is now 0-4 versus teams that are currently seeded in the NFL playoff picture.

Or perhaps it’s that Dallas was supposed to have made strides since an offensively flat 12-10 loss to the New Orleans Saints on Sept. 29 … yet the Cowboys seemed to relive that same game in a 13-9 loss to the New England Patriots on Sunday.

Or maybe — finally — Cowboys owner Jerry Jones is feeling what has frustrated a large portion of his fan base for years:

That this franchise is too experienced to be this inconsistent; too talented to be this maddening. And that at some point, the head coach is the guy who needs to be held responsible for the never-ending gap between expectation and reality.

“With the makeup of this team, I shouldn’t be this frustrated,” Jones said after the loss to the Patriots.

Jones is finally realizing what his fans have known for years: that Jason Garrett is in over his head.

Jones refused to extend Garrett’s contract before this season and then awkwardly laughed off the subject when pressed about it in training camp in July. That contract expiration date has always been a significant sign from Jones — a signal flare to his fan base that he understood the stakes in 2019 and wasn’t willing to put anything more than a verbal commitment behind a head coach he’s been defending for basically a decade.