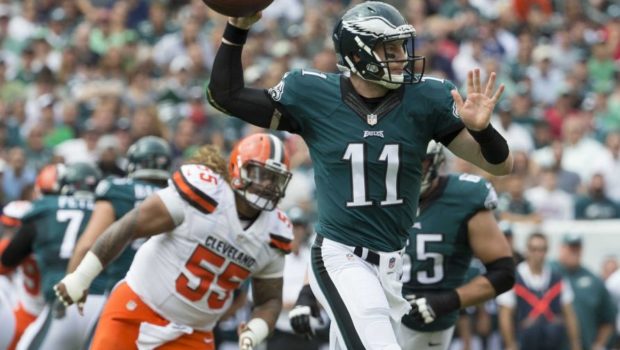 EAGLES STILL A 3-PT. DOG IN CHICAGO ON MONDAY NIGHT!

The Eagles are stuck as a 3-point underdog Monday night in Chicago, and that’s why I like the Bears:

I like Carson Wentz, but beating the Browns in Week 1 should go alongside Ohio State taking care of Tulsa last weekend. Facing the Browns is like playing Madden on “Rookie” mode, so we shouldn’t put too much stock into the performance at this point.

There are two ways to think about the Bears, meanwhile:

Either they’re a mistake-prone mess bound for a lost season after their alleged new game-breaking receiver’s lone Week 1 contribution was running a bad route that led to a costly interception, or they were simply rusty and can eke out a 9–7 season and save everyone’s job.

Jay Cutler was sacked five times in the opener, and as Philly’s Malcolm Jenkins said this week, Cutler’s “an entirely different quarterback” when pressured.

The Texans’ pass rush is much better than the Eagles’, though, so Cutler is unlikely to hit the ground as often this week.

I think the Bears are better than they seem, but proving that starts with beating Wentz in Chicago. If they can’t do that, then forget what I just said: They’re trash and Wentz is a god.