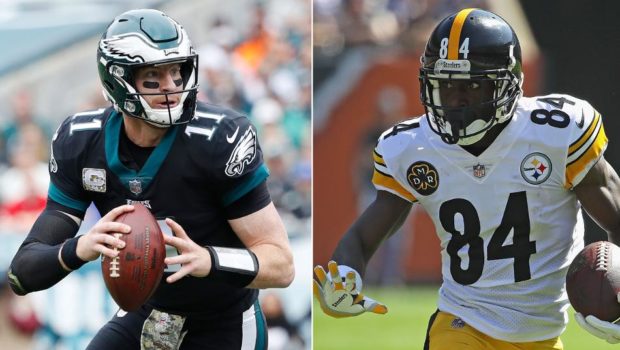 I know it’s only Nov. 18, but it’s looking more and more like the Super Bowl next February in Minneapolis will be a Pennsylvania primary:

Unstoppable because: The Eagles don’t own the NFL’s best record by accident; they’ve swept Washington, beaten the Panthers and Chargers on the road and blown out the Broncos and Cardinals. By most accounts, Carson Wentz would be the MVP if the season ended today, as he’s currently on pace for 41 touchdowns, which would be tied with Kurt Warner (1999) for the second-most ever by a quarterback who is technically in his second season. Warner won MVP and the Super Bowl that season, and the only player who had more was Dan Marino in 1984, when he had 48 touchdowns en route to MVP and the Dolphins appearing in the Super Bowl.

Wentz could have a better supporting cast on offense than Marino had and maybe a better defense than Warner had. None of Zach Ertz, Alshon Jeffery and Nelson Agholor may top 1,000 yards, but they could all finish with double-digit touchdowns. LeGarrette Blount (4.6 yards per carry) is now sharing the load with Jay Ajayi, who had 88 yards and a touchdown in his Eagles debut. Defensively, they have an elite defensive line with Fletcher Cox, Brandon Graham, the recently-extended Timmy Jernigan and Vinny Curry, ranking first in rushing yards allowed. The secondary is a tier below that in talent, but Philly’s 11 interceptions are the third-most in the league.

Stoppable because: The Eagles are sort of the masters of none in the league, which speaks to the fact that the NFL does not have a single dominating force to be feared; the Eagles may be the best team, but they’re not a juggernaut. The Eagles rank third in DVOA, but they aren’t in the top four on offense, defense or special teams. If you’re betting on a championship team, are you betting on a team that satisfies you in a lot of areas but doesn’t wow you in any of them? Philly has to play four of its next five games on the road, including at the Cowboys, Seahawks and Rams. Plus, Jason Peters may have been the best player on the roster, and he’s out for the rest of the year with a torn ACL and MCL. Middle linebacker Jordan Hicks has also hit IR, and the drop-off from him to Joe Walker could be significant.

Unstoppable because: The Steelers decided to start playing defense again. After losing that identity and instead focusing on the B’s (Ben, Bell, Brown) instead of the D, Pittsburgh finished 30th in defensive DVOA in 2014. The Steelers improved to 11th in both 2015 and ’16. This season, they’re back to being a top-five unit and could finish the year as the best defense in the NFL. The Steelers are second in yards and points allowed, and they’re 7-0 when allowing fewer than 20 points. Plus, they still have the three B’s. Ben Roethlisberger is a two-time Super Bowl winner. Le’Veon Bell is first in rushing yards. Antonio Brown is first in receiving yards. Yeah, they’re good.

Stoppable because: In both of their losses, the Steelers allowed more than 200 rushing yards; they haven’t allowed more than 91 rushing yards in any other game. So if in the playoffs they have to face a team like Jacksonville (the Jaguars beat them 30-9), or the Titans, or the Chiefs (Pittsburgh actually held Kansas City to 28 rushing yards), will that ultimately do them in? A Steelers-Patriots AFC championship game may be inevitable, and Pittsburgh is a lot more capable of toppling Brady than it was in the last AFC Championship.