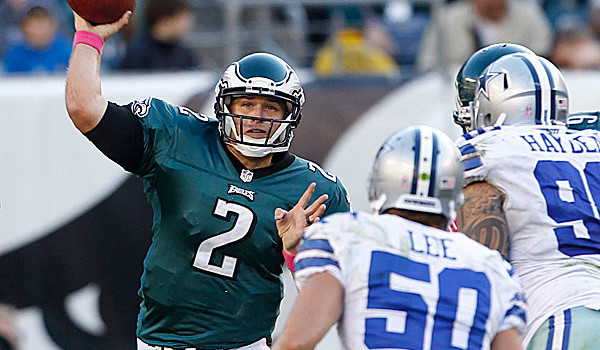 EAGLES TO START BARKLEY AT QB AGAINST JETS

Matt Barkley will start at quarterback for the Eagles in Thursday night’s preseason finale against the Jets, with starter Nick Foles and Matt Sanchez and Barkley in the depth chart. Quarterback G. J. Kinne is also on the roster.

“We need to see Matt play a lot,” Kelly said. We feel very comfortable with our 1 and 2 guys. So, we’re going to give Matt a really extended look against the Jets.”

So Sanchez, now relegated to No. 3, will begin the game on the bench against the team that made him the fifth overall pick in the 2009 draft. Although he was less than spectacular, Sanchez was the starting quarterback when the Jets made it to the AFC championship game in 2009 and 2010.

When asked about the impact of increased penalty flags on pass defense, Kelly said that the Eagles faced more man-for-man coverage last season than any team in the league and doesn’t think the crackdown on coverage penalties such as defensive holding and illegal contact will change that much.

“The rule hasn’t changed,” he said. “The rule is the same one it’s always been. It’s just that, I think after five yards, some teams were getting away with things 6-7-8 yards down the field. The first five yards it still will be a battle. That’s what the teams that have the big, physical corners are still going to be.”

Kelly believes what will force opposing defenses to play less man coverage against the Eagles is the presence of pass-catching running back Darren Sproles and the emergence of tight end Zach Ertz.

On defense, coordinator Bill Davis was much happier with the pass rush by his No. 1 unit Thursday night against the Steelers than he was in the first two preseason games.

The Eagles put constant pressure on quarterback Ben Roethlisberger in the first half, holding the Steelers to zero points, eight first downs and 89 net yards.

“I thought the guys played solid,” Davis said. “The first half was a productive first half against a great offense. A great quarterback who’s won a lot of games in this league. I thought the secondary covered well and I thought our rush was better. And we stayed with the same base game plan. It was nice to see it moving forward.”

The Eagles released 14 players Saturday, reducing their roster to 76. They must be down to 75 by Tuesday at 4 p.m. The most notable cuts were inside linebacker Jake Knott, who played in 12 games last season as a rookie, and 2013 seventh-round pick Joe Kruger. Knott was going to miss the first four games after getting suspended for violating the league’s policy on performance-enhancing drugs.