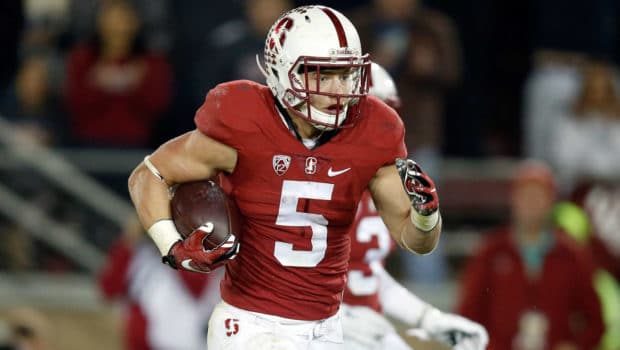 FOR EAGLES, STANFORD’S MCCAFFREY COULD BE THE NEXT WESTBROOK!

The Eagles should consider drafting Stanford running back Christian McCaffrey.

Though the Eagles are in need of a workhorse at running back, McCaffrey could provide a change of pace out of the backfield — kind of like Brian Westbrook did for eight years!

Doug Pederson, from the coaching tree of Andy Reid, likes using running backs as receivers out of the backfield. McCaffrey could fit in that role well. The 20-year-old likely won’t be an every down back, and that’s okay. He still has value at the next level — especially in an offense like Pederson’s.

“I’m not saying he is the best back in the draft, but I believe he can be a star in the right system. In a place like New Orleans or New England, he could be a headache because the play callers would use him all over the field to create mismatches. … Not that he is strictly a system guy but there are some coaches in the league who understand how to maximize his talents as a versatile playmaker.”

“You know (he’s going to be compared) to Marshall Faulk, but I see him more like Brian Westbrook. He is a change-of-pace back and a returner. He will make some plays, but I don’t think he can be your No. 1 guy.”

The Eagles threw an average of five passes per game to running backs in Pederson’s first season in Philly. With a guy like McCaffrey lining up in the backfield, that number would only go up.

He can also be used as a slot receiver. McCaffrey runs crisp routes and would likely be a mismatch lined up as a receiver at the next level.

McCaffrey is a good return man as well, with over 1,000 kick return yards and a touchdown in his sophomore year.

The biggest knock on the former Stanford running back is his potential inability to withstand the physical punishment of the NFL. McCaffrey is 6-0 and his weight hovers around 200 lbs.

The running back will likely be selected in the first two rounds of the draft. Brooks thinks he will taken between picks 29 and 50. The Eagles could take McCaffrey with their second-round pick.

Though he may not be a bell cow in the NFL, McCaffrey’s skill set could be optimized in the Eagles offense.