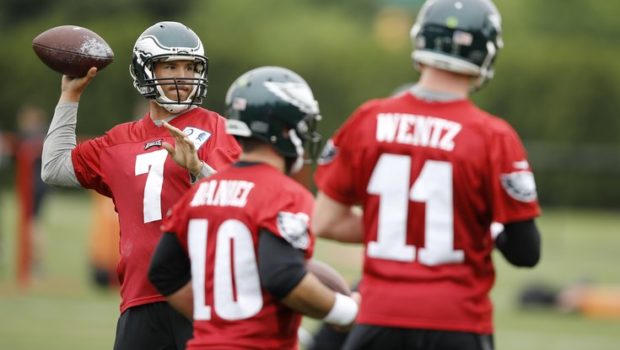 EAGLES STACKED AT QB — WITH A HIGH PROBABILITY OF CHAOS!

Eagles training camp opens in 16 days — July 28 at NovaCare — and all eyes will be on quarterbacks Sam Bradford, Carson Wentz and Chase Daniel.

Wentz is the QB of the future. The only question is how far away that future is, and whether Chase Daniel will keep him as the No. 3 guy for a stretch in the meantime.

Teams often intend to bring their rookie QB along slowly, but it so rarely works out that way if the starter struggles or, maybe more likely in Bradford’s case, gets hurt.

Bradford and Daniel are receiving significant money, so the Eagles are financially incentivized to get use out of them before they turn to Wentz, and Bradford actually played pretty well last season.

In an ideal world, this is a great QB situation, but the chance Bradford plays well enough to keep the QB controversy at bay is small in a town like Philly, where the fans will voice their displeasure quickly.

This has the potential to become pretty chaotic pretty quickly.