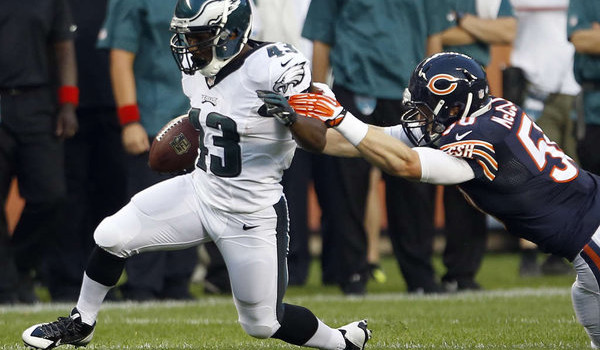 The silly Philly media don’t know what to make of hybrid Darren Sproles.

Before the season began dopes like Michael Barkann and Angelo Cataldi were dubious about this 31-year-old running back/receiver who the Eagles acquired in the off-season from the Saints for a fifth-round draft pick.

Now, he is Super Sproles!

With those 13 touches, he is averaging 131.5 yards per game and over 10 yards per touch. And that doesn’t include his eight punt returns for another 87 yards (an 8.7 yards).

“I think when you look at his fitness level and I think his size, there may be a misconception there,” Kelly said. “He’s 200 (actually 190) pounds. He’s short, but he’s not small and I think there’s a difference.

“When you look at Darren, he’s really, really put together and he’s probably the most fit guy on the team. There’s a special quality to him from that standpoint, and I don’t know if we knew that when we got him.”

Last year, his final season in New Orleans and the least productive of his career, Sproles averaged 8.2 touches per game and produced just under 55 yards per game and less than seven yards per touch.

Sproles’ busiest season was 2011, his first with the New Orleans Saints when he averaged 10.8 touches per game — the only time in his career he’s averaged double figures in touches — and produced 82 yards per game.

“I really don’t put a number on things like that,” Sproles said after practice. “I feel good. Some times during the course of a game, the more you get going, the more you need to be out there.”

Told of Kelly’s comments on his size, the running back smiled.

And about his age?