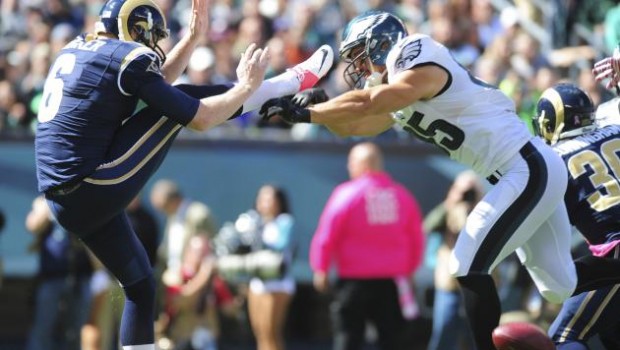 On Sunday the Eagles won their fourth game in five weeks, outlasting the St. Louis Rams, 34-28, making their record at home a perfect 3-0.

No doubt, there was some shoddy play in the secondary and that made the game much closer than it needed to be. But that’s the NFL — if you don’t finish the game off teams hanging around might find a way to win. Fortunately for the Birds, that didn’t happen.

Lost in the noise of not winning the game by enough points, the Eagles have produced three special team touchdowns in three consecutive weeks for the first time in their 81 year history, two on blocked punts for fumbled recovered TDs!

At his Monday afternoon presser, head coach Chip Kelly reiterated how hard players such as special teamers James Casey, Chris Maragos, Trey Burton, and Bryan Braman work in practice, and the results are showing up on the scoreboard — often being the difference in winning or losing the game.

Lane Johnson also came off the suspension list and that gave the offensive line some stability. RB LeSean McCoy had a good game on the ground, going 24/81 yards, and improvement over his last two outings. But McCoy is still looking for the breakout game the NFL rushing champion is chomping at the bit to have.

The surprising New York Giants come to Philly next Sunday night, Oct. 12 @ 8:30pm on NBC-10, with the Eagles looking to take control of the NFC East versus their bitter rival.