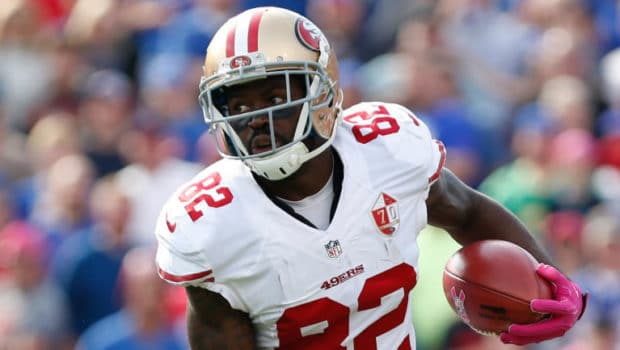 The Eagles may actually be finding room on the bench for woeful wide receiver Nelson Agholor!

According to Pro Football Talk, the Eagles and 49ers are discussing a trade involving wide receiver Torrey Smith.

No deal is imminent, but the Eagles potentially acquiring Smith makes sense. He’s been disappointing while playing on bad offenses in two seasons with the 49ers, and the Eagles would love to bolster their receiving corps for a run at the NFC East title.

The trade deadline is next Tuesday, Nov. 1.

The 49ers are one of the worst teams in the NFL, so the thought of getting something for Smith would likely be appealing. Smith has 13 catches this season after having 33 last year. He never had fewer than 49 catches in four seasons with the Ravens, and his ability to stretch defenses got him a five-year, $40 million contract from the 49ers in March 2015.

Smith is just 27, and depending on the 49ers’ asking price, the Eagles may not be the only team interested. Smith has 36 career touchdown catches, just six since joining the 49ers.