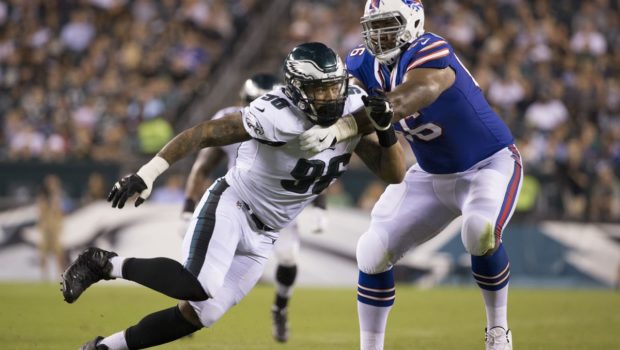 So, the NFL trade deadline is 4 p.m. today, and don’t count the Eagles out, as big boss Howie Roseman has shown he loves to deal.

Jason Peters is out for the season and Big V is at best a band-aid, so how about this:

First-year general manager Brandon Beane and coach Sean McDermott quickly made their mark in Buffalo by casting off big names in wide receiver Sammy Watkins, cornerback Ronald Darby and defensive tackle Marcell Dareus. Moving Glenn at midseason might seem odd given the possibility of a playoff push, but a trade would shed the team of a hefty contract that still has three years remaining.

The loss of franchise left tackle Peters put a damper on the Birds’ NFL-best 7-1 start. Halapoulivaati Vaitai already has proven to be an unreliable fill-in after the Eagles went 2-8 last year with right tackle Lane Johnson sidelined.

Landing a starting-caliber replacement could be a complex process given salary-cap restrictions and a shortage of draft picks. But the Eagles have invested heavily in bolstering Carson Wentz’s supporting cast, and the 28-year-old Glenn could keep the offense rolling this year.