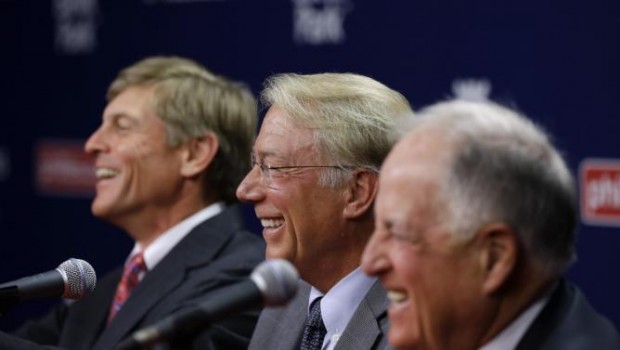 “Philly is a good sports town and you have to make some allowances,” Phillies president Andy MacPhail (middle, above) said last weekend. “These are not excuses, but you have to make some allowances. There’s only so much disposable income that people have. Let’s be honest, the Eagles and the Sixers sucked some of that out before we even threw a pitch. I was hoping for and expected that we would have meaningful, measurable progress and I think what we’ve done to this point exceeds meaningful, measurable progress,” Phillies president Andy MacPhail said last weekend in Miami. “Just the fact that we’re a game-and-a-half in first place exceeds my expectations.”

Andy MacPhail is therefore the leader of a big club.

“We’re in a different situation than we anticipated and we have to act accordingly,” MacPhail told MLB.com. “I know (general manager) Matt Klentak and his group is doing exactly that. We’re in a position where we need to try to augment our current group to try to preserve our place in the standings for as long as we can.”

Klentak and his lieutenants are busy pursuing trade opportunities. There are even indications that the Phils would do a deal for Manny Machado without immediately signing the free-agent-to-be to a contract extension, though Machado’s contract status would certainly affect the price the Phillies were willing to pay.

“It’s an inexact science,” MacPhail said. “You try to ascertain as best you can what is immovable and where you have areas where you are giving up talent but you have enough in the system to absorb that. It’s what you can afford to do and what you can’t because our stated goal and our directive from ownership is to be in a position where postseason potential isn’t just a one-and-out type of thing.”

John Middleton, the Phillies managing partner, is aggressive and eager to win.

“John wants to win,” MacPhail said. “John wants to sustain winning. But John is not an ‘excite the town at any cost’ guy. My view is that he’s smart and he’s realistic. I think I’ve done a good job of explaining the importance of an organization and progress and he’s seen that. He’s not willing to give up too much of that just to make a splash. Someone wrote the other day that ownership wants to make a splash. Let me tell you something about John Middleton. He’s not a ‘splash’ guy for something that doesn’t make sense. I can promise you that.”

“I need to build an organization on the baseball and business side that is going to sustain success and make us a competitive product for years to come and an attractive place to come for years to come.”