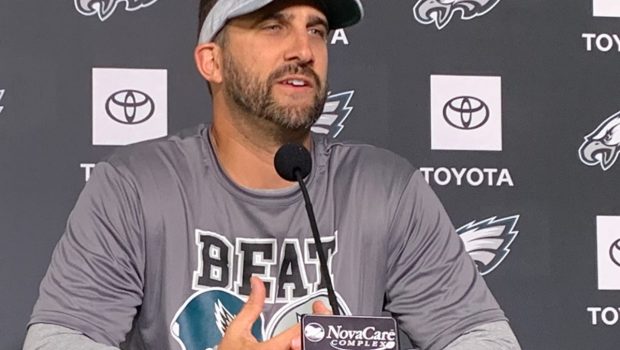 Sirianni is embracing the rivalry and connecting with a fan base that hates the Cowboys more than any other team.

“I really love the fact that I’m able to partake in this rivalry and it means a lot to the city, to our team,” Sirianni said. “I’ll be wearing this all week. My kids got it, my wife has one. And, yeah, we’ll be wearing them.”

He doesn’t care if it provides bulletin board material heading into Monday’s game.

“I’m sure they’re going to have the picture of [me with] this shirt on there. And that’s fine,” Sirianni said. “I don’t know if anyone on our side, their side, needs any more bulletin board material or if it’s even going to help because we know how big the rivalry is and how much it means to both sides.”

The Cowboys aren’t being goaded into a response, nor are they fueled by manufactured gimmicks, be they T-shirts or any other stunts. They are fired up about the game, in part, because it’s the first home game of the season and it’s a prime opportunity to grab the pole position in the race for the NFC East crown.

So, no, there will not be any “Beat Philly” T-shirts in the Cowboys locker room anytime soon.

“Nah, we’re good. We’re focused on being the best that we can be,” McCarthy said when asked about if he wanted a shirt to match Sirianni’s. “That would be a hell of a T-shirt, if anyone wants it, but we’re focused on what’s in front of us. We have enough internally to work on. That’s our focus.”

Cowboys running back Ezekiel Elliott was also nonplussed when asked if wanted McCarthy in a similar shirt. “Nah, we stay in our lane,” he said.

Cowboys cornerback Trevon Diggs said the shirt does arouse any emotions in him. “Nothing for real. I really don’t try to pay attention to outside factors, outside of our organization,” he said. “I just focus on what we’re focusing on … so it doesn’t bother me.”

Cowboys vice president Stephen Jones said every team in the division makes the Cowboys out to be that team’s biggest rival. As far as the Cowboys are concerned, the intensity has been cyclical, usually depending on which team is the biggest threat at the time.

”What I’ve seen in my 30 years it can migrate depending on who’s got the hot hand at the time,” said Jones, who has seen the rivalry peak against New York and Washington over the decades. “When you have a division like the NFC East, I just think it’s there. Certainly it can ebb and flow as to which one is at the top of the list.

“The Eagles obviously had some great runs there where they’ve won quite a bit,” Jones said. “I can feel it in their tone. There is a little more sports hate for the Eagles right now than the other two at this point.”

That is certainly Elliott’s perspective. He acknowledges that the Eagles rivalry has been the most heated one he has been a part of since joining the team in 2016.

The Cowboys lead the all-time series 70-54, including the playoffs, but it’s been tighter over the last five years. Dallas holds a 6-4 edge in that span, with the teams splitting the matchup every year except for 2018 when the Cowboys swept the two games.

“They’re definitely probably our biggest rival since I’ve been here, probably the team I don’t like the most,” Elliott said. “Philly week is always fun.”