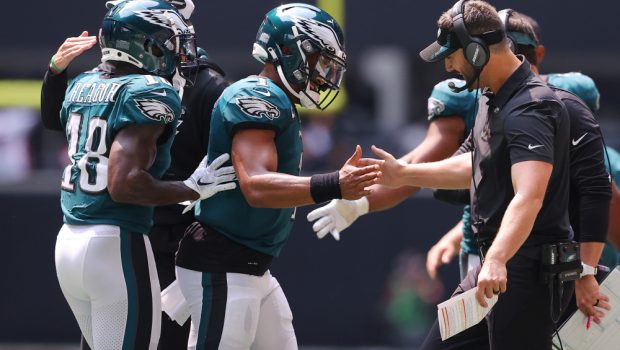 EAGLES SIRIANNI, HURTS HAVE A BOND PEDERSON, WENTZ NEVER HAD!

Eagles coach Nick Sirianni and quarterback Jalen Hurts are on their way to developing a bond that Doug Pederson and Carson Wentz never had.

“It’s great to see,” Hurts said on the AP Pro Football Podcast. “He’s a big-time players’ coach and he wants to see his players do great things and I want to see him do great things as well. So all of this is a package deal and we’re all in it together. So continuing to connect to one another, whether it be through conversation or through representation or showing some type of belief, just connecting and growing and creating a strong bond.”

The second-year QB followed up an impressive performance in a 32-6 win at Atlanta in Week 1 with a lackluster effort in a 17-11 home loss to the San Francisco 49ers. He completed only 52.2% of his passes and underthrew a couple of deep balls. But Hurts has no turnovers in two games and he leads the team with 144 yards rushing.

“I put a 24-hour rule on all things good and bad,” Hurts said. “You have to look at it as the glass half full, half empty, and I see a lot of opportunity for this football team, a lot of things that we can do. Just have to put those pieces together. We learn from everything and understand that you’re going to grow and learn something every day. So we’ve taken on that mentality of rent being due every day, attacking every day and depositing something every day so we can be a better football team.”

Sirianni’s relationship with his young quarterback is still growing, but he knows there are times when he has to push hard.

“I think he’s very coachable, very, very coachable,” Sirianni said. “I think this whole team is coachable. And I think when you’re making corrections on film, there’s a standard, right? There’s a standard that is set on each play. The job description on each play, we feel as coaches, are very defined. … And we hold everybody accountable to that standard. And so as long everybody’s getting corrected, my experience with guys is everybody is coachable. … And when the standard is set and that standard is met, you get excited about it and celebrate it. And so that’s our style. And Jalen is no different than the guys on the team.”

Hurts took over for the final four games after Carson Wentz was benched. He had mixed results and heard speculation throughout the offseason that the Eagles would pursue another starting QB after trading Wentz. But Hurts is here and it’s his team for now.

“I’ve always had the confidence in myself to continue to grow and build every day,” Hurts said. “Now I now have an opportunity to continue to write my own story and help write a story for this football team with the Eagles this year. So everybody has a part in it. But I’m thankful for that opportunity now. And I want to take advantage of it.”