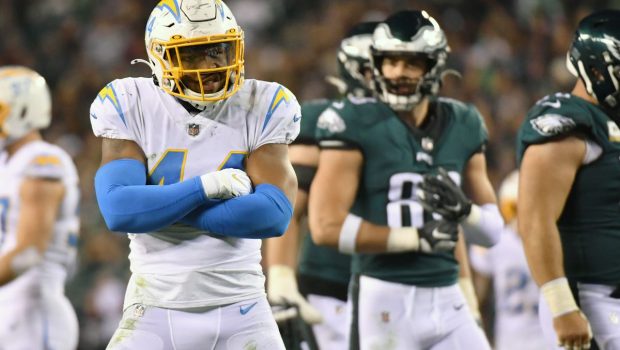 Kyzir White is a fifth-year linebacker who in 2021 set a career high with 144 total tackles – third most in the AFC with seven games in double digits – and has the speed and athleticism to cover in the passing game.

A safety in his college days at West Virginia, White is one of seven siblings, three of whom reached the NFL (Kevin and Ka’Raun are former wide receivers).

A fourth-round draft pick by the Chargers in 2018, the Macungie, PA, native is only 26 and he steadily earned his time with the Chargers – starting three games as rookie, then seven in 2019, 10 a year later, and all 17 contests for Los Angeles last season. He’s an agile, to-the-ball player who has had, per Pro Football Focus, “four straight seasons with coverage grades above 60.0, not an easy feat for an off-ball linebacker in today’s NFL against so many hi-lo concepts and the increase in run-pass options putting so much stress

The #Eagles are signing LB Kyzir White and giving him a 1-year deal worth up to $5M, source said.