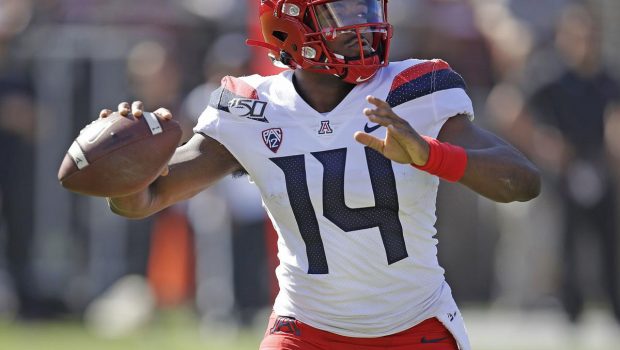 EAGLES SIGNED QB KHALIL TATE, AND LIST HIM AS A WIDE RECEIVER!

The Eagles signed undrafted free agent Khalil Tate on Sunday, and the former Arizona quarterback is listed as a wide receiver by the Birds.

NFL scouts weren’t too impressed by Tate’s passing ability, otherwise he would have been among the 255 players selected in this weekend’s draft.

While Tate has never played wide receiver at a competitive level, he flashed plenty of ability as a ball carrier at Arizona, compiling nearly 2,300 yards on the ground.

And with the Eagles prioritizing speed this offseason, his best chance of making the roster is to move to wide receiver, running back or some sort of gadget role that incorporates all three like former BYU quarterback Taysom Hill, who just signed a two-year, $21 million extension with the New Orleans Saints.

There is actually quite a bit of precedence when it comes to college quarterbacks transitioning to wide receiver in the NFL, most recently guys like Terrelle Pryor, Brad Smith, Antwaan Randle El, Julian Edelman, and Josh Cribbs. Tate certainly has the physical tools to do it, complementing his blazing speed with a 6-foot-2, 215-pound frame.

“Ultimately, Tate will require a long-term plan and patience, whether he plays quarterback or receiver,” wrote NFL.com’s Lance Zierlein, “and he’ll have to prove he’s determined enough to do what’s needed to make it.”