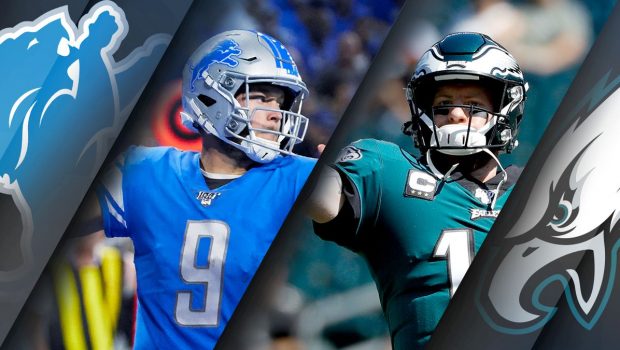 EAGLES SHOULD TRADE WENTZ OR HURTS FOR MATTHEW STAFFORD!

The Eagles don’t exactly have a quarterback controversy.

But they do have a QB dilemma.

Carson Wentz is still here with his massive contract and diminishing skill set.

Rookie Jalen Hurts is also here, and while he showed flashes of competence no one really knows if he is an every-week quarterback.

How about trading one of them to Detroit for Matthew Stafford!

ESPN is reporting that Stafford is expected to not return to the Lions this offseason, with Detroit listening to trade offers starting this week.

With new general manager Brad Holmes and new head coach Dan Campbell now in place, the Lions will soon begin trade discussions that most likely will result in a new quarterback for the team — largely influenced by what and whom Detroit will get in exchange for Stafford, sources told ESPN.

The Lions are expected to receive at least a first-round pick, league sources said.

Stafford approached the Lions about the possibility of a trade being in the best interest of both parties, but the franchise tabled that discussion until completing the coach and GM searches, a source told ESPN’s Michael Rothstein.

Holmes and Campbell were told before they were hired that trading Stafford could be a possibility, sources told ESPN. Stafford then had a call with higher-ups — including Campbell and Holmes — late this week and the decision was made to pursue a trade, a source told Rothstein.

Stafford, who has not had a playoff win in his 12 seasons with the Lions, is expected to bring back a handsome return for multiple reasons. He turns 33 in March, has two years remaining on a team-friendly contract that is due to pay him a combined $43 million — $20 million this year and $23 million next year — and he still is one of the most talented quarterbacks in the league.

He has started 165 games for the Lions since being taken No. 1 overall in the 2009 draft, completing 62.6% of his passes for 45,109 yards, 282 touchdowns and 144 interceptions. He led 38 game-winning drives during his career and 31 fourth-quarter comebacks — making him one of the better comeback quarterbacks in league history.

He’s tied for eighth all time in game-winning drives and seventh in fourth-quarter comebacks.

Stafford becomes the latest in a long line of quarterbacks expected to be available this offseason.

In addition to Stafford being on the trading block, Houston might be forced into the same situation with Deshaun Watson, and Philadelphia could decide to move on from Carson Wentz.

Carolina will explore its options at the position and there are lingering quarterback questions with teams such as Denver, Chicago and San Francisco.

Stafford is from Texas and could be interested in being traded back home, but there is expected to be significant interest in Detroit’s long-time quarterback, sources told ESPN.

What Detroit can get back will help define the direction the franchise goes in trying to replace Stafford.

The two sides are expected to part ways on good terms, with both sides recognizing that it’s best to go in a different direction, sources told ESPN.

Stafford spent 12 seasons with the Lions, failing to win a playoff game in three trips — joining a list that includes Jim Hart, Kenny Anderson and Archie Manning as the only quarterbacks to spend 10 seasons in one city without a playoff win.