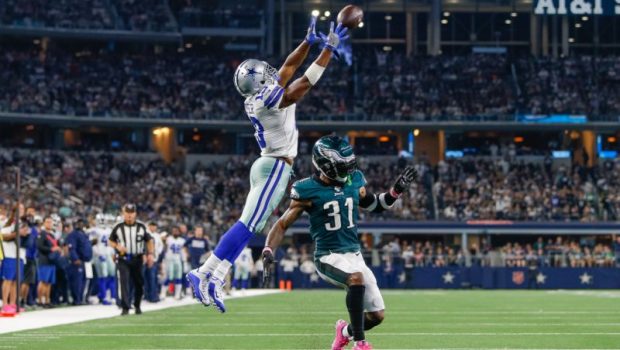 NFL free agency doesn’t open until March 18 — 24 days away — but the Eagles have to be ready.

If the Cowboys can’t keep Amari Cooper, the Eagles lead the pack in trying to chase him down.

The Eagles are moving on from Alshon Jeffery following a season marred with injury and a rumored rift with Carson Wentz, and Nelson Agholor is an unrestricted free agent not expected to be re-signed. Add to this the fact DeSean Jackson himself is aging and returning from injury, and you can rapidly see how much adding Cooper would immediately impact the Eagles receiving corps.

And, of course, they’d love to stick it to their bitter rival from Texas in the process.

From there, the Giants wouldn’t be too far behind, considering they’re still working to locate a dynamic No. 1 receiver and new offensive coordinator Jason Garrett would love to get Cooper back in his system. It won’t be easy for them to justify swinging big for him as long as they’re willing to allow Tate a $10.5 million cap hit though, and they do have promising up-and-comers in Sterling Shepard and Darius Slayton.

So while the Giants make sense, it’s only if they move on from Tate, and that’s why stronger suitors would be the Buffalo Bills, Denver Broncos and Arizona Cardinals. The Bills enjoyed a resurgent year from Cooper’s former teammate, Cole Beasley, and adding Cooper opposite the speedy John Brown would be a lethal set of receiving weapons for Josh Allen. The Broncos loved the 1,000-yard season they got from Courtland Sutton in 2019, but the loss of Emmanuel Sanders created a void Cooper instantly fills and signing him would help ensure Drew Lock has a breakout sophomore campaign.

And then there are the Cardinals, who know Larry Fitzgerald won’t play forever — even if it appears he will — needing a long-term weapon for Kyler Murray, who’ll allow Christian Kirk to excel as a No. 2 option.