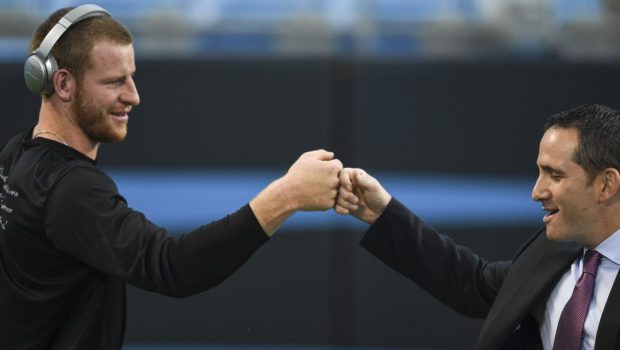 EAGLES SHOULD FIRE HOWIE ROSEMAN, WHO IS IN OVER HIS HEAD!

So, let’s see if I’ve got this straight.

And yesterday that admitted the colossal mistake in judgment by trading their franchise quarterback Carson Wentz.

After moving heaven and earth and moving up twice in the 2016 draft to pick him.

After anointing him as the team’s franchise QB by shoving a $128 million contract at him in June 2019.

And who made these colossal mistakes in judgment?

Lurie can’t pay for this mistake, just like the gut judgments he made by hiring Ray Rhodes, boyhood bud Joe Banner and all-time phoney Chip Kelly.

He owns the team, and his judgment cannot be questioned, just like Jerry Jones down in Dallas.

But will someone please tell me why Roseman still has his job?

Trading Wentz carries a $33.8 million dead cap charge. According to ESPN’s Field Yates, it is the largest dead cap hit in NFL history.

The 2020 season was a nightmare, both for Wentz and the organization on the whole.

Wentz went 3-8-1 in 12 starts, completing just 57.4 percent of his pass attempts and throwing 15 interceptions, tied for most in the league. He also took a league-high 50 sacks, though an injury-riddled offensive line certainly did not help matters.

The 28-year-old was eventually benched in favor of rookie Jalen Hurts, which (in hindsight) essentially marked the beginning of the end for Wentz in Philly.

Unfortunately for the Eagles, there appeared little choice but to take this hit. Wentz did not give any indication he was swayed by the hiring of former Indianapolis Colts offensive coordinator Nick Sirianni after the Birds dismissed Doug Pederson. It seemed inevitable the team would eventually have to go in a new direction.

The question now becomes, what is that new direction? Will the Eagles place their trust in Hurts, or will they use the No. 6 overall pick to draft a quarterback?

Regardless, Wentz’s dead cap charges are a painful reminder of potential not realized in the City of Brotherly Love.