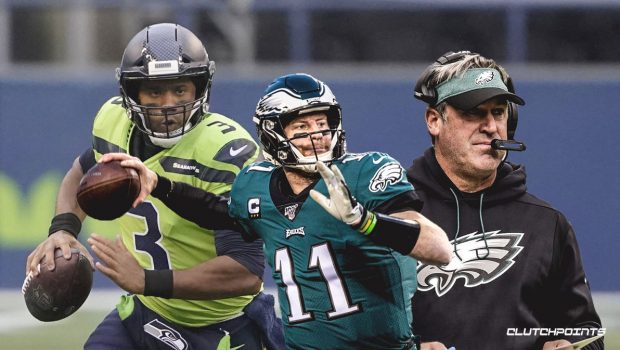 The Eagles lost another winnable game yesterday and their coach and quarterback both performed as if they were still in Pop Warner instead of he NFL.

And afterward there was a real-time discussion on “Eagles Post-Game Live” about what to do.

Hall of Fame journalist Ray Didinger said benching the woeful Carson Wentz would send the wrong message to the team and the fans that the season is over.

What else do you have to lose by starting rookie Jalen Hurts?

He certainly can’t do worse than Wentz, who has regressed remarkably from his MVP-like 2017 season.

And, if I were Jeff Lurie, I would fire Doug Pederson today.

It would be a mercy firing.

After the game Pederson that Wentz will remain the starter in their Week 12 showdown against the Seattle Seahawks next Monday night at the Linc.

Playing in his fifth NFL season since being drafted by the Eagles with the second overall pick in the 2016 draft, Wentz has been plagued by a combination of injuries, a porous offensive line, and a penchant for turning the ball over. In throwing a league-leading 14 interceptions on the year, he has paced the Eagles to a poor 3-6-1 record–though remarkably they remain in first place in the NFC East division.

Despite committing to Wentz for at least another week, Pederson’s reasoning for keeping the signal-caller in the starting lineup was less than a ringing endorsement.

Explaining that a benching of Wentz would send a signal to the rest of the team that the season was “lost,” the coach’s decision would seem to indicate that the QB will remain the franchises starter until they fall out of playoff contention. With the NFC East competing for the unwelcome distinction of being the worst division in the history of the game, there’s a good chance then that Wentz will play in the remaining six games.

However, if there is a potential bright spot, it’s that the Eagles will be facing a Seattle secondary that has put up just as many subpar performances as the aforementioned quarterback. Facing another embattled QB from the 2016 draft last week in Jared Goff, the Seahawks’ secondary allowed the quarterback to put up a productive performance while failing to cause a turnover.

For a team and player with few opportunities remaining to turn things around, next Monday night might be the Eagles’ best chance to get a much-needed W.