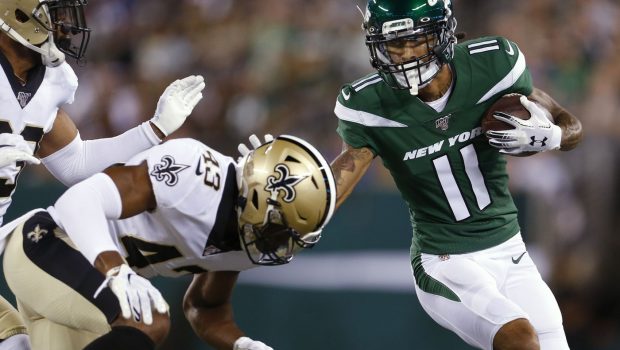 The Eagles are desperate for help at wide receiver, even if DeSean Jackson is totally healed from muscle core surgery.

Pro Football Focus has says the Birds will potentially target Robby Anderson, who is set to be a free agent.

Anderson has spent the first four years of his career with the New York Jets and is coming off of a season in which he caught 52 passes for 779 yards and five touchdowns.

The 26-year-old, who played at Temple, went undrafted in 2016 but landed with the Jets as a free agent. He proceeded to have a strong rookie campaign, playing in every game and logging 42 catches for 582 yards and a couple of scores.

The following year, Anderson had a breakout season of sorts, hauling in 63 receptions for 941 yards while reaching the end zone nine times. He then snared 50 balls for 752 yards and six touchdowns in 2018.

Robbie Anderson has been durable, missing just two games throughout his NFL tenure. He has never posted No. 1 receiver numbers, but he has also partly been the victim of a poor quarterback situation in New York since entering the league.

The Eagles went 9-7 and won the NFC East this past season, ultimately falling to the Seattle Seahawks in the Wild Card Round of the playoffs.