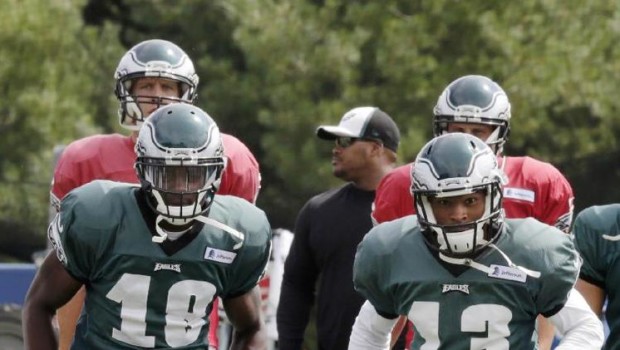 EAGLES SHOULD BE CONCERNED ABOUT MACLIN’S DURABILITY

The Eagles’ opener against Jacksonville is 24 days away, and it is beginning to look like Jeremy Maclin (left in photo above), who missed all of last season with a torn ACL, will have small, niggling injuries during all of this season.

Midway through a practice with the New England Patriots on Wednesday, quarterback Nick Foles hit Maclin in the back of the end zone from 40-plus yards out, a play the duo has now made two days in a row. After the touchdown, however, Maclin went to the sideline and did not return for the rest of practice, a sight that has been a common one during training camp.

Speaking to reporters after practice, Maclin, who also scared Eagles brass last week when he tweaked an ankle, revealed that he suffered a left hamstring injury on the play, and decided to sit out the rest of the practice as a precautionary measure.

“It shouldn’t be a big deal,” Maclin said.

As for tomorrow night’s preseason game against the Patriots, Maclin said he was not sure if he would play or not, but hoped he would suit up.

“He is still trying to accommodate to everything we do from an offensive standpoint,” Kelly said prior to practice. “But everyday you see him get a little bit better and better.”

The severity of Maclin’s hamstring injury is yet to be determined, but seeing the receiver go down during yet another practice has to be concerning for the Eagles. The team decided to bring Maclin back on a one-year deal despite the fact he missed all of last season with a torn ACL, banking on him to return to the player who lead the team in catches in 2012.

At times during camp, Maclin has flashed signs of still being that player. The touchdown play on Wednesday was a prime example of what he can bring to the offense.

As head coach Chip Kelly likes to say, however, the best ability is durability