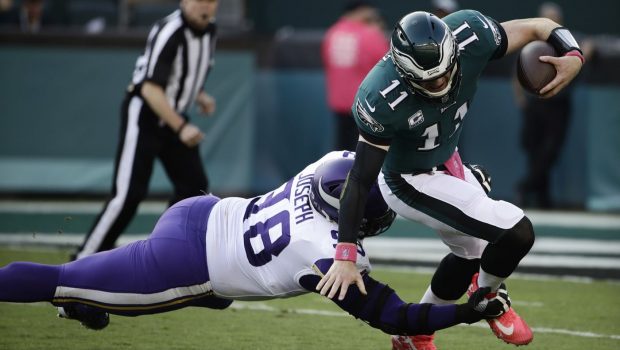 EAGLES SHORT-WEEK GAME AT GIANTS: JUST WHAT THE DOC ORDERED!

Super Bowl hangover or not, the 2018 Eagles hardly resemble the team that scored points at will — almost 30 a game — last season and now has trouble scoring a TD the entire game!

They are looking for those same answers today at the NovaCare complex.

One obvious weakness is the running game, or lack of a consistent one. That has forced coach Doug Pederson to throw the ball way more than the last year. That also puts Carson Wentz (above) in harm’s way when he drops back 37, 50, 35 times his first three games back this season: a formula for disaster!

With the terrible defeat at home last Sunday to the Minnesota Vikings 23-21, they lost the ball on a fumble in the red zone and also lost Jay Ajayi for the season with an ACL tear as the RB situation went from bad to worse.

The weak running game hurts the whole offense, and they need to figure out a way to run the ball one way, or another.

It’s hard to imagine the running backs on this roster can turn it around, and looking to the outside is a realistic way to pump some life into this stagnant ground game.

Some names have been rumored since J Train has hit the DL, including Steelers holdout Le’Veon Bell who would be perfect, but that situation’s a bit dicey.

Cardinals RB David Johnson also has been dangled as a replacement.

Falcons Tevin Coleman is also an option as a player that could be on the move to the Birds.

Somehow the Eagles need to get this situation resolved with 11 games left: In a weak NFC East division there’s still lots to play for!

Also a possible Shady McCoy reunion is being discussed with the Bills, they say a 2nd & 3rd round pick would get it done. Do it!

Next up on a short week is the NY Giants at Metlife Stadium, October 11, 8:20pm/Fox/NFL Network.

0 thoughts on “EAGLES SHORT-WEEK GAME AT GIANTS: JUST WHAT THE DOC ORDERED!”