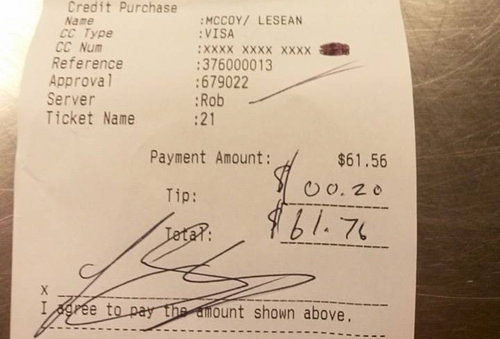 Shady McCoy is the best player on the Eagles and probably the best running back in the NFL.

For that, he is well-compensated — $9.7 million this season, not bad for playing a game most of us would play for nothing.

And McCoy, a child of the middle class from central Pennsylvania, knows a thing or two about saving his money.

According to a receipt posted by the Philly restaurant PYT, at 1050 N. Hancock St. in Northern Liberties, McCoy and three friends left a 20-cent tip on a $60 lunch bill on Monday afternoon.

“As soon as they sat down, they were pretty rude,” Knelly, who happens to be a Baltimore Ravens fan, told NJ.com. “I asked some questions, they weren’t really responsive. They were cursing, making derogatory comments. I put their order in and forgot one of their appetizers, which I apologized for. They ordered things, and once they got it, said ‘We ain’t eating this (bleep)! We don’t want it.’ ”

When reached for comment, a representative for McCoy said he was looking into the matter and the authenticity of the receipt.