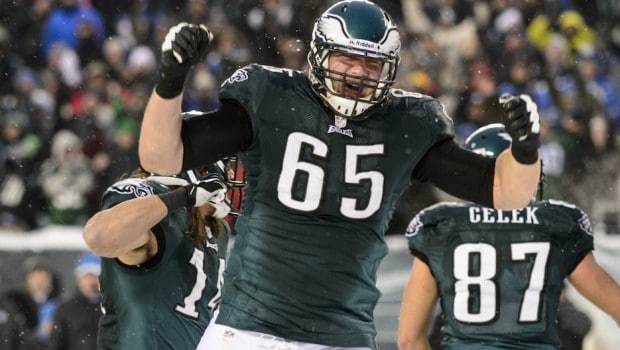 EAGLES’ SENIOR BOWL MOMENT: WILL THEY FIND THE NEXT LANE JOHNSON OR THE NEXT MARCUS SMITH?

Eagles big boss Howie Roseman and VP of personnel Joe Douglas consider this week’s Senior Bowl Ground Zero for improving the 7-9 team into a playoff contender and beyond.

“You put so much time in the fall getting to know these guys, going to the schools, getting the work in, watching these guys practice, then having them come down to Mobile and compete against each other, it’s a great environment, it’s the best players in college football, it’s so exciting,” Douglas said on WIP.

The Eagles have fallen in love with players at the Senior Bowl in the past and spent high picks on some, including Lane Johnson (above), Marcus Smith, Jordan Matthews and Jordan Hicks.

The Birds still don’t know whether they will pick 14th or 15th when the NFL Draft comes to Philly beginning April 27. There will be a coin flip next month with the Colts to determine which team gets which pick.

Roseman said he has gone over several variations of how the draft could play out and, while he would clearly like to pick 14th: “Either way, when we look at the potential of the first 15 in this draft, it’s exciting. A lot of scenarios we have gone over at this point we sit there with big smiles on our face. I think the fans will be real excited about who we pick in the first round. I’m really glad we got that first-round pick, even though some of the heartache we went through in the season it will all be worthwhile when we’re drafting in the first round.”

Roseman called it a difficult decision but one that was right for the Eagles in that it returned a first-round pick in this draft and a fourth-rounder next year from the Vikings. He mentioned Lurie when talking about the trade of Bradford.

“It is hard especially when you make a trade like we made eight days before the regular season to reset his expectations for that year,” said Roseman, “but he’s totally supportive because he can see the light and I think it starts at the quarterback position.”