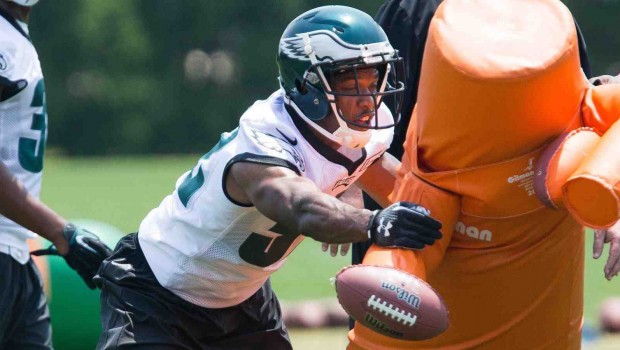 An old Arabic expression has meaning for the Eagles this Monday, August 10:

The dogs bark but the caravan moves on.

In other words, no matter what happens — injury, holdouts, banners over a practice — life continues.

And for the Eagles life without rookie cornerback JaCorey Shepherd is what they are facing.

Before the he was carted off the field yesterday with a knee injury, Shepherd was probably the sixth man in the secondary behind the four starters — Byron Maxwell, Nolan Carroll, Malcolm Jenkins and Walter Thurmond — and second-round pick Eric Rowe (above), who will likely come in and play outside in the nickel, moving Carroll to the slot.

Coordinator Billy Davis said earlier in the week that, because of the versatility of his linebackers this season, the Eagles would likely play less “dime” than last season. So in that regard Shepherd’s loss is far from devastating.

But, just as linebacker Travis Long’s loss took away that depth Kelly mentioned, so does Shepherd’s injury.

And it also means another player — veteran special teams ace E.J. Biggers, rookie Randall Evans or rookie Denzel Rice — is going to have to step up and replace Shepherd.

It may also give new life to second-year man Jaylen Watkins, who was shuffling back and forth between safety and cornerback.

Before Shepherd’s injury, and the severity of it will certainly determine a lot, Biggers looked to be the 5th corner and a key special teams player. Evans and Rice, depending on how they did in the preseason games had a shot at the 53-man roster, but were probably destined to the practice squad.

Watkins was battling for the fourth safety spot more than a corner spot.

If all that fails, maybe the Eagles can offer Pittsburgh a third-round pick for Boykin.