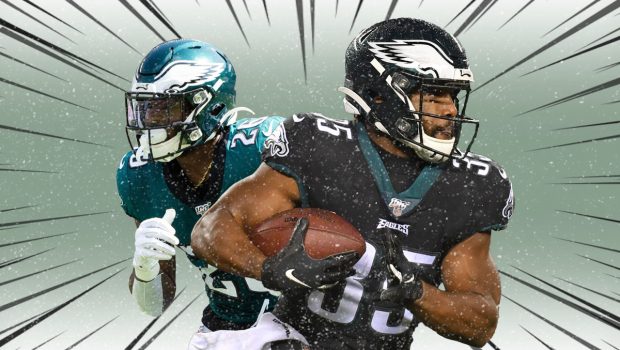 EAGLES SANDERS, SCOTT STEPPING UP VS. HAWKS — AND IN FANTASY!

The Eagles are preparing for their Monday night Linc match-up with the Seahawks.

And here’s a look at their fantasy running backs:

The Eagles feature Sanders well ahead of Scott on a week-to-week basis, but generally he’s not getting the sort of true workhorse role that we’d hope for given the overall brutality of this offense.

Fifteen-plus carries and five targets per week is fine, but it warrants treatment as more of a low-end RB1 than top-five option at the position as long as this offense continues to stutter out of the starting block on a weekly basis.

Next up is a Seahawks defense that has allowed the fourth-fewest yards before contact per rush this season. It’d make sense if Carson Wentz is leaned on more than ever against this brutal secondary. Sanders remains a top-12 option in this spot thanks to his plenty solid usage and scoring upside; just realize he’d be a legit high-end play with more of a true three-down workload.