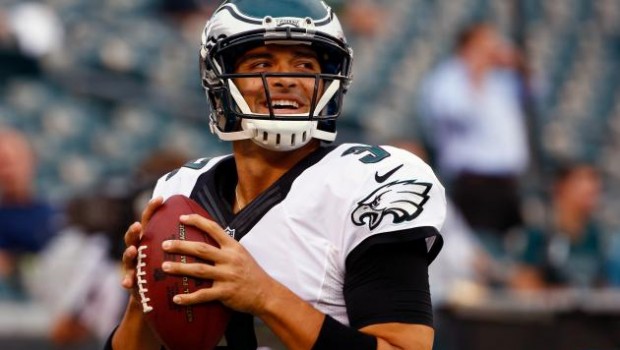 EAGLES’ SANCHEZ SURE TO REMEMBER THE TITANS THIS SUNDAY

The last time Mark Sanchez faced the Tennessee Titans in Week 15 two years ago, his Jets lost 14-10 and he threw four interceptions and fumbled a snap on the final possession.

He would get only one more start with New York before being released in March after missing last season with a torn labrum.

Eagles fans hope he does better this Sunday as Sanchez’s Birds face the Titans at the Linc.

The game will also serve to revive the Eagles (7-3) who were pummeled last Sunday at Green Bay 53-20.

They’ve won nine consecutive regular-season home games – their longest streak since the early 1990s – and are 15-2 against teams .500 or worse under coach Chip Kelly, including 6-0 this year.

“If it was a situation in that Green Bay game where we literally just couldn’t compete, like we knew we can’t fix these mistakes, we’re just doomed, then we’d be worried,” Sanchez said. “But all that stuff is fixable. I’m really confident in the system, I’m confident in Chip and all of us just wanna get back out on the field.”

Tennessee (2-8), meanwhile, is trying to avoid losing five straight for the first time since 2010 behind rookie sixth-round pick Zach Mettenberger, making his fourth NFL start. The Titans have been particularly bad during a four-game road losing streak, getting outscored 114-48 and being held to an average of 258.3 yards.

They weren’t much better entering their last matchup against Sanchez with a 4-9 record in Week 15 of 2012, but they eliminated his New York Jets from playoff contention with a 14-10 win.

Sanchez had two touchdown passes in relief of Foles to beat Houston and two more the following week in a terrific starting debut with Phily, throwing for 332 yards without an interception in a 45-21 rout of Carolina. His 346 yards last week marked the second-best total of his career, but he lost two fumbles and the last of his two interceptions was returned for a touchdown that put the Eagles in a 39-6 hole in the third quarter.

“We’re so close to really breaking this thing open,” Sanchez said of the offense. “We’ve shown flashes of it. We just haven’t done it probably as consistently as we’d like. We’ll clean those things up and hopefully hit our stride.”

Jordan Matthews certainly has. Since Sanchez took over, the duo has hooked up 14 times for 280 yards and four touchdowns in 11 quarters. Matthews is looking to become the first Eagles rookie receiver to post three straight 100-yard games.

Jeremy Maclin keeps performing at a high level, sitting 79 shy of his first 1,000-yard season and one TD from his career high of 10.

LeSean McCoy, on the other hand, hasn’t really gotten going. The NFL’s top rusher a season ago with 1,607 yards, McCoy is at 729 while averaging a career-worst 3.7 per carry.

“I don’t know if there is one thing,” Kelly said when asked how McCoy can be better. “… I think statistically there is (a drop-off from last year), but I think we’re a different team. I think you’ve got to add everything to it. It’s not just one guy.”

Maybe McCoy can exploit a Titans run defense which has surrendered averages of 189.7 yards in the last three weeks. Le’Veon Bell gashed them for 204 yards Monday night as Pittsburgh rallied for a 27-24 win in Tennessee.