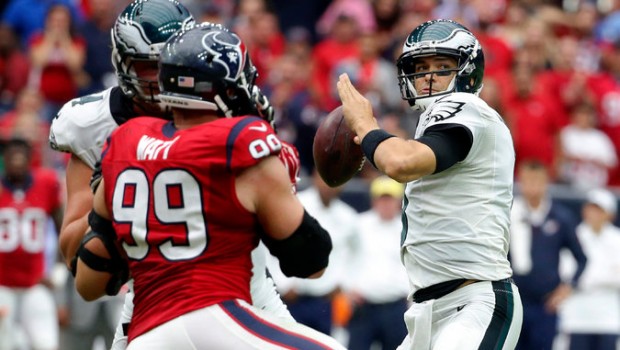 EAGLES’ SANCHEZ: ‘NOW I’M HOPEFULLY A BETTER VERSION OF MYSELF’

The third act of Mark Sanchez’s football life began Sunday, thanks to Eagles coach Chip Kelly, who insists on having two quarterbacks of starting caliber.

After Michael Vick was hurt last season, the Eagles might not have gone on to win the NFC East without Nick Foles, and now they are in a similar situation: With Foles, who cracked his clavicle, expected to miss at least the next six weeks, Sanchez has taken over a 6-2 team with Super Bowl aspirations. He will start Monday night, against Carolina, for the first time in more than 22 months.

He appeared to be leading the Jets’ quarterback competition in August 2013 when coach Rex Ryan decided to insert him in the fourth quarter of a preseason game against the Giants, behind the second-team offensive line, leading to a hit that tore the labrum in his right shoulder. Sanchez was infuriated, but he never griped in public.

Seven months later, the Jets released him, which was the best — and, really, only — move for both parties. To revive his career, Sanchez headed 90 miles south to play for one of football’s most innovative coaches in an up-tempo offensive scheme that can maximize his strengths.

“Just get the next play and go,” Sanchez said. “It feels like a fast break in basketball. You’re the point guard, and just dish it to the open guy. Don’t hang on to it too long, and try not to get hit.”

The Eagles’ offensive coordinator, Pat Shurmur, called the team’s system “quarterback-friendly” — as long as the quarterback makes good decisions. A quarterback’s two other most important attributes, Shurmur said, are his timing and his accuracy, and Sanchez has shown the Eagles that he has both.

“We don’t bog them down with a lot of silly things,” Shurmur said, “so the ball can come out quicker.”

Kelly eased Sanchez in by calling a play that sent Maclin on a deep post route on his first snap. Sanchez connected with Maclin for 52 yards, and later that drive, he found Matthews for an 11-yard touchdown. Sanchez finished 15-of-22 passing for 202 yards and two touchdowns with two interceptions, one of which bounced off the hands of Josh Huff.

“From the outside looking in, people would say he didn’t have the weapons he might have here,” Ertz, a tight end, said of Sanchez’s time with the Jets. “I mean, we do have a lot of weapons.”

The Jets’ lack of them stunted Sanchez’s development and contributed to his miserable performance across the 2011 and 2012 seasons — 52 turnovers and 12 losses in his final 18 starts.

Instead of serving as a caretaker, as the Jets more or less asked of him, Sanchez is being counted on to win the game. Shurmur said that the Eagles’ plan did not change when Sanchez entered the game on Sunday and that aside from adding a few elements that Sanchez prefers — designed rollouts, perhaps — their plan for Carolina would be the same as it would have been with Foles.

“He’s the kind of guy that will move the referee out of the way to get the ball snapped,” offensive lineman Evan Mathis said. “He takes the tempo seriously. He’s a fast thinker, and he can get that done.”

“I’d like to think I’ve grown, and I know I have,” Sanchez said. “Just watching film, things come faster; it comes easier. You hear a lot of people say the game slows down. I think you just tend to speed up, you tend to relax a little bit, and I really enjoy playing in this system, so I think it helps me.”

Sanchez turned 28 on Tuesday, an age when quarterbacks are considered in the prime of their careers. He chooses not to view this opportunity as a rebirth — “Sorry to ruin that one for you,” he said — or to let his past define him.

“I could go tease Mark right now about the butt fumble, and he’ll laugh about it,” Maclin said.

Sanchez had that good-natured personality when he played for the Jets, too. But now that he plays for an offensive-minded coach, on a thriving team and for an organization that he adores, only one thing links the two experiences: Sanchez, as he hoped he would be, is a starter in the N.F.L. again.