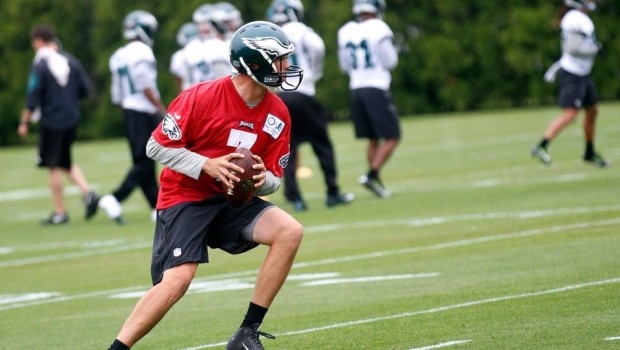 Sam Bradford won the day despite the day’s only interception. He completed every pass except for the interception, which hit his intended receiver in the hands. It was said in the past that Bradford would sometimes have practices with Rams in which the ball never hit the ground. This was one of those days.

How did the Eagles’ quarterbacks do yesterday during training camp?

Sam Bradford was methodical and consistent, not flashy.

No single throw really stood out Monday. Bradford continued to throw short passes that caught receivers in stride and allowed them to pick up yardage. Few of his passes traveled more than 5 yards beyond the line of scrimmage.

Chase Daniel’s short pass to M.J. McFarland was eye-catching because it came during a team drill. Daniel, looking over the linemen battling in the trenches, found McFarland right in the middle of the field and got the ball to him. For the taller Bradford or Carson Wentz, that might not be as impressive a feat, but it showed how the 6-foot Daniel has found ways to overcome his lack of height.

Carson Wentz threw four straight incompletions during a 7-on-7 drill and took off on runs during two other plays. They might have been good decisions, but in a noncontact drill, the quarterback should be able to get the ball out.

One of Wentz’s four consecutive incompletions was a dropped pass by wide receiver Marcus Johnson. Another, however, was intended for an open Paul Turner. Wentz fired the ball to his right, but it sailed behind Turner.