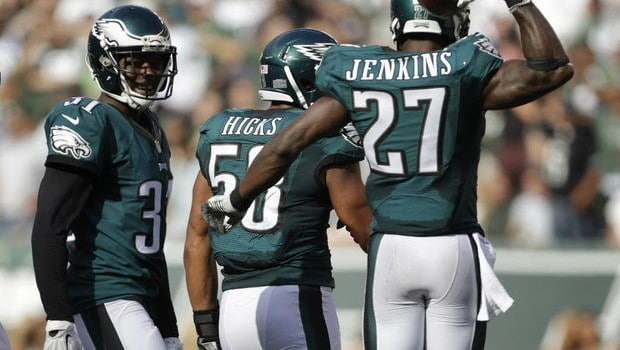 EAGLES-SAINTS SUNDAY MATCH-UP: HERE’S WHY THE BIRDS WILL WIN

These are the guys who hold the Eagles’ hopes for a win Sunday in their defensive hands against the great Drew Brees.

With the New Orleans Saints coming to the Linc this Sunday for a 1 p.m. Week 5 match-up.

The Saints had to go to OT to beat the depleted Cowboys last Sunday night, so both teams are 1-3.

The Eagles offense at its best can score points quickly. That has not been the case this season.

The Eagles rank near the bottom of the league in several offensive categories and have relied on a defense that has played more snaps than any other in the league to keep games close.

With a third-down conversion rate that ranks among the worst in the NFL, the Saints (1-3) defense could be in position to spend most of Sunday on the sideline when the teams meet for a noon kickoff at Lincoln Financial Field.

Here’s a look at the Eagles.

Offseason moves to get quarterback Sam Bradford in a trade with the Rams and to sign former Cowboys running back DeMarco Murray have not paid off.

Most troubling has been the play of Murray. His 1.6 yards per carry include a run of 30 yards Sunday against the Redskins. He otherwise has totaled 17 rushing yards over 28 other carries for an average of less than a yard.

As for Bradford, his 60.7 percent completion rate has been respectable. He has averaged 36 pass attempts for 948 total passing yards with six touchdowns and four interceptions. He has not been intercepted over the last 64 attempts in two-plus games.

Leading rusher Ryan Mathews played a big part in the Week 3 win against the Jets, with 24 carries for 108 yards and receiving touchdown in a 24-17 win.

At a position that has given Saints defenders trouble this season, third-year tight end Zach Ertz has 10 catches for 104 yards. He caught a touchdown in a January 2014 playoff game against the Saints.

The Eagles’ league-low time of possession on offense has caused the defense to be on the field more than any other team. And yet the Eagles have remained competitive with five interceptions among their nine takeaways, and by not allowing a touchdown on six of their opponents’ 11 trips inside the 20.

Former Saints free safety Malcolm Jenkins has made the most stops for the Eagles with 31 tackles. He also has forced two fumbles and recovered one.

Strong safety Walter Thurmond, signed by the Eagles after a knee injury limited him to two games with the Giants in 2014, has two interceptions and four pass breakups. Thurmond played on the Seahawks’ Super Bowl-winning team in 2013.

Also with interceptions are rookies Eric Rowe at cornerback and Jordan Hicks at inside linebacker. Third-year NFL linebacker Kiko Alonso had an interception in the opener against the Falcons and has not played since Week 2 due to a partial tear in an ACL. He was limited in practice last week Friday.

The Eagles pressure quarterbacks with outside linebackers Brandon Graham and Connor Barwin, as Barwin has two of the team’s six sacks.

Sproles returned a punt 89 yards for a touchdown in Week 3 against the Jets and followed with a return of 45 yards Sunday. His average of 19.9 yards over nine punt returns makes him a dangerous returner.

Kicker Caleb Sturgis missed a 33-yarder and an extra point Sunday in his first game in place of injured Cody Parkey. The Eagles lost that game to the Redskins 23-20.

Punter Donnie Jones has put six of his 26 punts inside the 20 and had one blocked and returned for a touchdown in a Week 2 loss against the Cowboys.

The Saints won a road playoff game for the first time in team history as Shayne Graham kicked a 32-yard field goal as time expired in a 26-24 victory.

Sproles and Jenkins played that game for the Saints. They joined the Eagles during the offseason. The Saints have 17 players left from their 53-man roster that day.