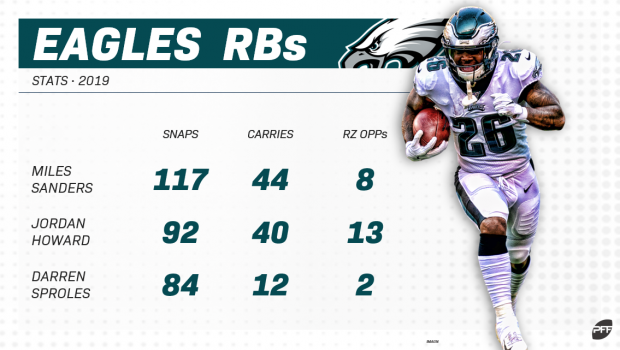 Fantasy facts: We have a full-blown committee in the Eagles backfield, which certainly can make things complicated for fantasy purposes. So far this season, Philadelphia has fed Miles Sanders 52 carries with Jordan Howard seeing 47. That being said, Howard does seem to be the preferred back inside the 20, as he’s leading Sanders in red-zone carries 11-8 and goal-line carries 5-2. Sanders still has the higher long-term ceiling, but for now it’s tough to trust either as anything more than a flex option.

Matchup upgrade: Alshon Jeffery got back onto the field last week and proceeded to find the end zone. Jeffery is in play as a solid WR2 option this week with a plus WR/CB matchup on tap against Darryl Roberts. So far this season, Roberts has been targeted a massive 28 times with 18 catches and two touchdowns in his coverage.

Matchup downgrade: Nelson Agholor was a fantasy fill-in last month, but he shouldn’t be anywhere near starting lineups in Week 5. Agholor gets a brutal draw out of the slot against Brian Poole. The Jets corner has been excellent out of the gate, grading out second overall at the position through the first month of the season. Poole is holding opposing wideouts to a 50% catch rate with an average of just 4.5 yards per catch in his coverage.

We’re also downgrading Le’Veon Bell this week. The veteran back and jet ski aficionado is averaging a massive 25 touches per game this season, so expect the volume to be there. Unfortunately, he may not be able to do anything with it just like we saw back in Week 3. Philly’s stout run defense has held opposing backs to just 2.9 yards per carry this season.

Key injuries: Sam Darnold was trying to get back on the field, but concerns about an enlarged spleen due to mono will keep him sidelined for at least one more week. Luke Falk will get the start yet again, so fire up the Eagles defense this week. … An abdominal injury has kept DeSean Jackson off the field for the last two games, and Jackson will miss at least one more. The veteran still offers upside when he returns, so keep him stashed on benches.