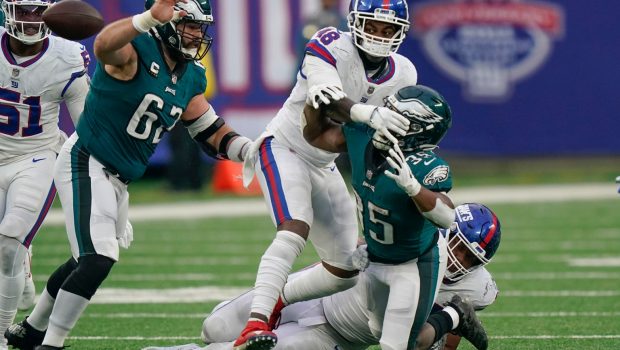 EAGLES RUN TOWARD THE PLAYOFFS HITS A SPEED BUMP!

Boston Scott’s late-game fumble wiped away whatever chance the Eagles had to win yesterday.

For the better part of a month, the Eagles shifted the focus of their offense to the running game.

Partly because they have a great offensive which moves defenders around like throw rugs.

And also because QB Jalen Hurts doesn’t have the kind of arm that can sustain 50 throws a game.

As if anyone can.

And they moved into the playoff convo, both as a Wild Card and as the NFC East winner, thanks to the Cowboys collapse.

Sounds good, but add the turnovers and the ratio doesn’t matter so much.

At a time when his team had an opportunity to close the reeling Dallas Cowboys’ NFC East lead to 1½ games while moving into wild-card position, Eagles QB Jalen Hurts – after seeming to solidify his standing in recent weeks – again showed his limitations as a passer, serving up a trio of interceptions while missing on 17 of 31 throws.

Expect the quarterback of the future debate to heat up again.