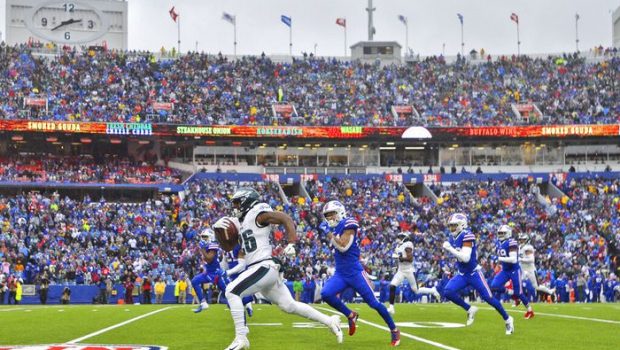 The rubber met the road for the Eagles today against the Bills in Buffalo.

Losers of two straight ugly and lopsided games, not to mention hounded my turmoil inside their locker room during the week, the Eagles played with a desperation that overwhelmed the favored Bills who fell to 5-2.

This game took a dramatic and disappointing turn for Buffalo in the moments before and after the intermission. Buffalo was leading 7-3 when it took possession at its own 20 with 2:27 left in the half, playing with the gusty wind at its back.

The hope was to move the ball to at least get into position for a field goal, but instead, on third-and-2 at the 28, offensive coordinator Brian Daboll dialed up a quarterback run to the right. Allen was hit by Brandon Graham and lost the ball, and Graham also made the recovery at the Buffalo 24.

Five plays later, Carson Wentz hit Dallas Goedert with a five-yard touchdown pass, and then Miles Sanders swept in for a two-point conversion to give Philadelphia an 11-7 lead.

In a game where you thought points were going to be precious, that was a big moment, and then another occurred on the second play of the third quarter when Sanders (above) broke a 65-yard touchdown run right up the middle and wasn’t even touched that made it 17-7 (Elliott’s extra point hit the upright).

Given the gusty wind that blew relentlessly all afternoon toward the tunnel end of the stadium, being down 10 points felt like a massive mountain to climb, and indeed it was.

The Eagles opened the scoring with a 54-yard drive that culminated in a 37-yard Jake Elliott field goal, but the Bills answered with an impressive 10-play, 75-yard touchdown march that began into the wind and was aided by a pair of personal foul penalties on Malcolm Jenkins.

The score came on the third play of the second quarter with the Bills facing third-and-goal from the 14. Allen dropped back, was flushed to the right, and just when it looked like he would run, he spotted Cole Beasley wide open and flipped a pass that Beasley walked into the end zone with for a 7-3 lead.

Then came the Allen fumble, the clear turning point of the game, and the Bills were on their heels the rest of the way.

To their credit, they did answer the Sanders’ touchdown with another 10-play, 75-yard drive that ended with Devin Singletary taking a short pass 28 yards for a touchdown, cutting the deficit to 17-13 as Stephen Hauschka’s extra point was blocked.

Unfazed, the Eagles quickly regained the momentum as Wentz’s first play after the kickoff was a 38-yard pass to Alshon Jeffery who beat Levi Wallace one-on-one, and that set up a four-yard TD run by Boston Scott with 5:38 left in the third quarter.

The Bills had an opportunity to cut into the 11-point deficit when the Eagles muffed a punt and Julian Stanford recovered at he Eagles 43, but the offense went nowhere and turned the ball over on downs.

What followed was a 14-play, 83-yard drive that consumed 8:17 and put the game out of reach. Wentz was brilliant as he twice scrambled to convert third downs with runs of 13 and 11 yards and ultimately, it was Jordan Howard who scored on a three-yard run to make it 31-13.