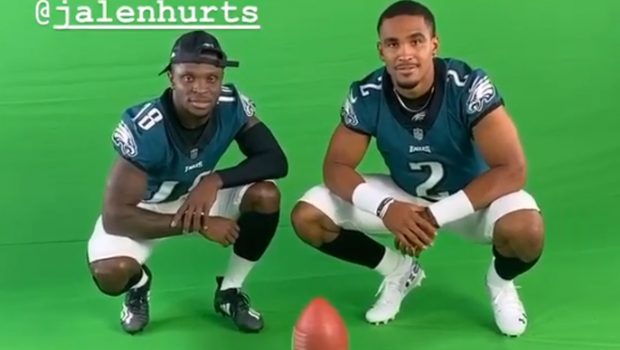 Eagles rookie QB Jalen Hurts was asked yesterday about the advice fellow quarterback Carson Wentz has given him.

If anyone knows what it is like to deal with the emotional roller coaster that is a player’s rookie season in the NFL, it would be Wentz

Wentz has no experience with this type offseason, and if all things go well, no one outside of this rookie class ever will.

“It’s been kind of a weird deal,” Hurts told reporters.

To make up for the lack of in-person instruction, Jalen Reagor, the Eagles’ first-round pick, said that he and fellow rookie wideouts John Hightower and Quez Watkins were in constant communication through text and FaceTime in an attempt to learn as much as possible from afar.

“I feel like I’ve known those guys for a minute,” Reagor said about Hightower and Watkins. “We’re here to help each other, and I want to see those guys succeed.”