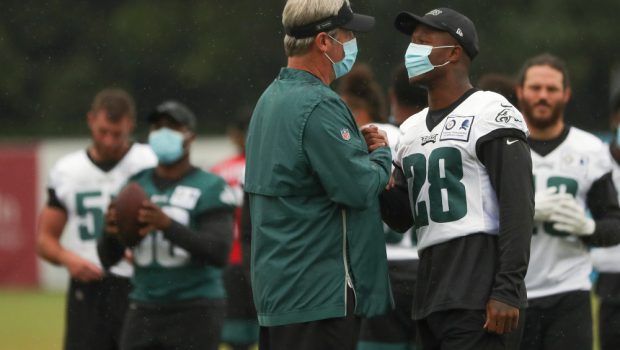 EAGLES ROOK WR QUEZ WATKINS MAY BE BACK ON ROSTER OCT. 20!

The Eagles have activated a 21-day practice window for rookie wide receiver Quez Watkins, who was placed on Injured Reserve prior to the season opener with an upper-body injury that he suffered in Training Camp.

Teams are able to place players on Injured Reserve and call them back up after missing just three games.

The Eagles have 21 days from now – technically, they have until Day 22 – Tuesday, October 20 at 4 PM – to determine whether to add Watkins to the active roster or keep him on Injured Reserve for the remainder of the season. Watkins can also be added to the active roster at any point before the October 20 deadline as long as there’s an open spot.

Watkins was a sixth-round pick of the Eagles in 2020 out of Southern Mississippi. The 6-0, 193-pound wide receiver looked the part in adapting to the NFL with his outstanding athleticism. Watkins was the second-fastest wide receiver (4.35 40-yard dash) at the NFL Scouting Combine. At Southern Mississippi, Watkins posted 159 receptions (second in school history) for 2,404 yards with 17 touchdowns. He was a two-time, first-team Conference USA selection. He led Conference USA with 1,178 receiving yards and was second with 18.5 yards per catch as a senior.