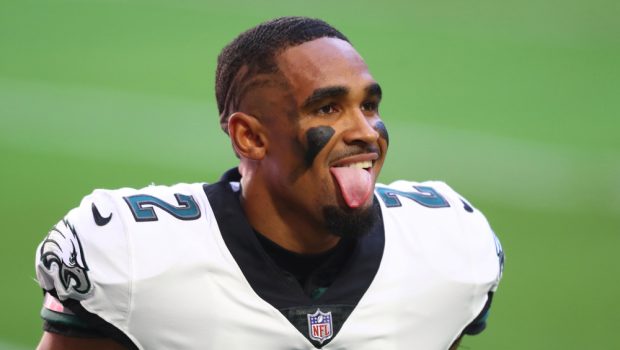 EAGLES ROOK JALEN HURTS HAS BEEN MONEY ON 4TH DOWN!

You want to know how clutch Eagles rook quarterback Jalen Hurts has been since taking over the starter’s role two and a half games ago?

Per Pro Football Reference, there had been 36 touchdown passes thrown on fourth down this season coming into Week 15.

Russell Wilson and Deshaun Watson were tied for the lead with four, followed by Matt Ryan with three, followed by Joe Burrow, Ryan Tannehill, and Andy Dalton with two.

The other quarterback with two fourth-down touchdown passes this season before Sunday? Jalen Hurts, who threw a 32-yard touchdown pass to Greg Ward against the Packers in Week 13 after he replaced Carson Wentz in-game, and then this 15-yard score against the Saints’ Cover-0 last week in his first NFL start:

Eagles first TD in the first half in 5 games

Wentz, by the way, has one touchdown and two picks on fourth down this season.

Hurts did it again against the Cardinals on Sunday, with this red zone touchdown to Ward on fourth-and-3:

Eagles head coach Doug Pederson has long been aggressive in adverse situations, and it seems that he has the ideal quarterback to get that done in the rookie second-rounder. Because Hurts doesn’t blink at those adverse situations, it can truly be said that the Eagles’ offensive philosophy is now…

One thought on “EAGLES ROOK JALEN HURTS HAS BEEN MONEY ON 4TH DOWN!”