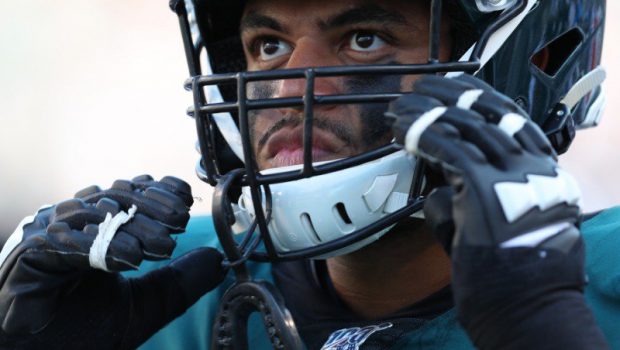 The Eagles passing game has been far less explosive than expected, ranking 24th in net yards per attempt (5.8).

Carson Wentz ranks just 22nd in passer rating on throws over 20 yards downfield (73.1), due much in part to the six drops by his receivers on those throws (second most).

When healthy, the Birds probably have a top-two offensive line.

The Eagles’ run game ground to a halt when Johnson left in Week 11 against New England.

With the Seahawks on tap Sunday the Linc, first-round pick Andre Dillard – Peters’ heir apparent who filled in for the left tackle during his latest absence – will be called upon to switch sides. He did not play a game at right tackle in four seasons at Washington State.

Russell Wilson leads the NFL in passer rating (114.9) and total QBR (78.0). His MVP bid will be tested coming out of the bye week, as each of Seattle’s next three games are against teams ranked in the top half of defensive EPA, starting with the 13th-ranked Eagles.

Despite losing their top three tight ends, the Seahawks continue to generate production from the spot. Seattle placed Ed Dickson and Will Dissly on IR and traded Nick Vannett to Pittsburgh; former New England castoff Jacob Hollister has stepped in as an auxiliary target for Wilson. Hollister had eight receptions for 92 yards in two Patriots seasons; the ex-UDFA acquired via trade has 12 catches for 99 yards and three touchdowns in his past two Seahawks games. Even when the 32-year-old Dickson comes off IR, Hollister still figures to be a key part of the offense.