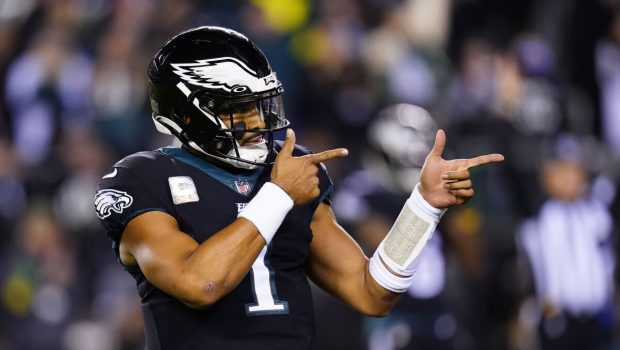 The Eagles’ magical season rolls on as the Birds travel up the Jersey Turnpike to take on the surprising 7-4-1 NY Giants this Sunday at 1pm.

QB Jalen Hurts has beat up the last two opponents with his full arsenal this year’s NFL teams haven’t figured out.

Hurts has vaulted himself into serious MVP conversations with his last two dazzling games, gutting the Green Bay Packers two weeks ago for a career Eagles high 153 yards rushing by himself, 363 yards as a team putting up 40 points versus the Packers.

Hurts ability to either beat you with the pass or run has become a lethal combo for opponents to detect, or stop.

Last week versus a suspect Titans pass defense he shredded them for 380 yards with three touchdown passes in a 35-10 blowout win.

As the Birds enter the final month of the season the goal is clear — solidify the No. 1 seed in the NFC, having all playoff opponents come through the Linc with an Eagles team that’s been hot all year with a league best record of 11-1.