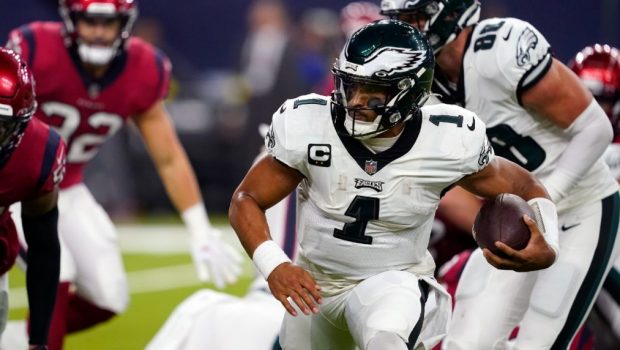 Jalen Hurts threw for 243 yards and two touchdowns, and the Eagles beat the Houston Texans 29-17 for the first 8-0 start in franchise history.

Hurts lost a fumble in a forgettable first half and game was tied at halftime.

But C.J. Gardner-Johnson grabbed his NFL-best and career-high fifth interception before Hurts threw a 17-yard touchdown pass to A.J. Brown to give the Eagles the lead in the third quarter.

Houston (1-6-1) added a field goal after that but another scoring toss by Hurts and his 2-point conversion run extended the lead to 29-17 early in the fourth.

The Texans were driving late in the fourth when Davis Mills was intercepted again, this time by James Bradberry and the Eagles ran out the clock to secure the victory.

Gardner-Johnson got an interception for a fourth straight game when picked off Mills with about 8 ½ minutes left in the third quarter and returned it 25 yards.

The Eagles cashed in on the turnover two plays later when Hurts found Brown for the score to make it 21-14 with about 8 minutes left in the third.

Houston cut the lead to 21-17 on a 30-yard field goal by Ka’imi Fairbairn late in the third.

Hurts found Dallas Goedert for a 4-yard TD pass on the next drive and Hurts padded the lead with his 2-point conversion run.

The Texans took an early lead when rookie Teagan Quitoriano, who was making his NFL debut, grabbed his first career reception for a 2-yard touchdown on the first series. Quitoriano is a fifth-round pick who missed all season with a knee injury.

That score was set up by a 34-yard reception by Phillip Dorsett two plays earlier.

Philadelphia tied it at 7-all on a 2-yard run by Miles Sanders on fourth down late in the first quarter. Sanders finished with 93 yards rushing.

The Eagles were driving early in the second quarter when Hurts was sacked by Steven Nelson, who forced a fumble that was recovered by Jaleel Johnson at the Houston 35.

Houston couldn’t move the ball and had to punt. Philadelphia then put together a 10-play, 79-yard drive capped by a 4-yard TD run by Kenneth Gainwell to take a 14-7 lead.

The Texans tied it less than a minute before halftime when Mills connected with Chris Moore on a 13-yard touchdown pass. The play was first ruled in complete, but it was reviewed, and the call was overturned.

Philadelphia attempted a 54-yard field goal as time expired in the first half, but it sailed wide right.